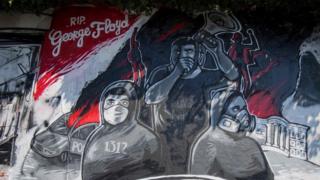 Radio stations, TV channels and people on social media are joining in the movement.

Blackout Tuesday is a day of reflection and protest in the aftermath of George Floyd's death.

It also aims to help highlight black voices on all media platforms.

Find out how people have been joining in below...

Another night of protests and violence across the US

The initiative was started by Brianna Agyemang and Jamila Thomas, who work for Atlantic Records.

They posted a statement under that hashtag #TheShowMustBePaused, calling for "a day to disconnect from work and reconnect with our community" and "an urgent step of action to provoke accountability and change".

"The music industry is a multi-billion dollar industry." they said. "An industry that has profited predominantly from black art. Our mission is to hold the industry at large, including major corporations and their partners who benefit from the efforts, struggles and successes of black people accountable."

Many musicians and record companies shared their statement, and 2 June became Blackout Tuesday.

What have people been doing? 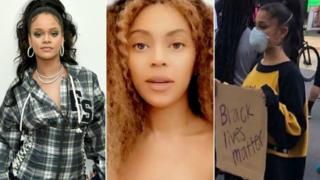 BBC Radio 1Xtra is hosting a series of discussions and debates in support of the black community, with song choices that reflect black pride and identity.

Rihanna has said her Fenty beauty label would not conduct any business on Tuesday.

ITV show This Morning went dark for a few minutes, showing a black screen with the words "Black Lives Matter".

Music streaming company Spotify has added eight minutes and 46 seconds of silence to select playlists and podcasts, and replaced some playlists with a black tile.

On social media many people are sharing a black tile to take part in the movement. 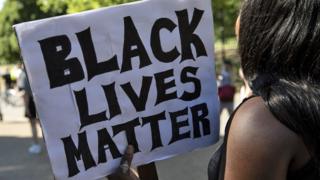 Getty Images
Why have some people criticised it?

Some people have pointed out that the black squares people are sharing on their social media platforms are filling up the feed, which could make it difficult to find posts from black creators and the information they have to share.

As well as this people have encouraged users to not use the BlackLivesMatter hashtag when taking part in Blackout Tuesday, as this too makes it harder to find useful posts and information.

Instead, users have been asked to post the images without any hashtags, or to use the specific #BlackoutTuesday one.