Coronavirus: Most vulnerable shielding in England allowed outdoors from Monday

More lockdown rules are being relaxed in England, allowing the most vulnerable people to go outside again.

For 10 weeks, people who are most at risk of becoming seriously ill from coronavirus have been told not to leave their homes at all. This is called social shielding.

From Monday, the latest change will allow those who have been shielding to go outside with members of their household and meet one other person.

This latest change comes as other rules are amended from the start of the week, allowing some schools and shops to reopen.

What is the latest lockdown advice?

How Scotland's lockdown rules have changed

What is social shielding?

However, the easing of the lockdown in England follows a warning from scientists, that it may be too soon to relax restrictions.

The government says the change in England will provide a much-needed boost to those most at risk who have been staying inside their homes to 'protect themselves and the NHS'. 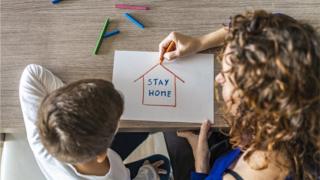 Prime Minister Boris Johnson said that "thousands of lives" had been saved by those who had shielded themselves.

"We have been looking at how we can make life easier for our most vulnerable, so I am happy to confirm that those who are shielding will be able to spend time outside with someone else, observing social distance guidelines," he said.

Most vulnerable people who have shielding were first asked to do so by their doctor several weeks ago. Many of those shielding have been given additional support, such as food deliveries, to avoid going to busy places like the shops.

While support like food deliveries will continue, under the new rules, 2.2 million people in England will now be allowed to go outside with one other person from another household, while maintaining social distancing.

Coronavirus: What is social distancing?