Coronavirus: Some schools in England are open again but changes have been made

Some primary schools in England opened up again from Monday 1 June - but how different are they compared to before?

The UK government has said that Reception, Year 1 and Year 6 pupils in England can go back to school after they felt confident that enough progress has been made to keep the number of cases of coronavirus down.

However, a plan to get all primary pupils back to schools in England has been scrapped, with the government saying it wants to focus on getting them back in September instead.

It agreed it was not always safe or practical to get all children back to class so early, after scientists and teachers raised concerns. Some schools have stayed shut in some parts of the country for the same reasons.

What is the latest lockdown advice?

What's it like going back to school after lockdown?

What's happening in the rest of the UK?

Elsewhere in the UK, Wales will reopen schools on Monday 29 June.

There will be a four-week term starting from Monday 29 June, that will finish on Monday 27 July.

There will also be an extra week added to the Autumn half-term break.

Class sizes will be smaller, but schools will be open to all years for limited periods during the week.

Schools in Scotland are planning to reopen at the start of a new term in August and Northern Ireland have said they don't plan to reopen classrooms before the start of the next school year.

For those children who have returned to school, it looks very different to what it was like before they closed on 20 March.

Why have schools gone back?

The UK government is keen to get children back into school so they don't fall behind with their education and so they can see their teachers and friends - both of these are also good for children's mental health,

It decided that it is safe for primary schools in England to begin to open again, based on a number of tests.

It won't happen all at once though - schools are being told to open up in a 'phased return' - that means not all year groups will go back at the same time. 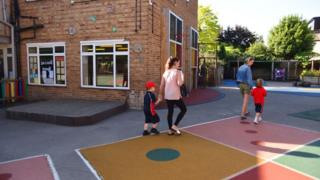 A socially distanced first morning back in school

To begin with, they've said that children in nursery, Reception, Year 1 and Year 6 should return.

Some year groups in secondary school (Years 10 and 12) are getting some 'face-to-face' time with teachers too. 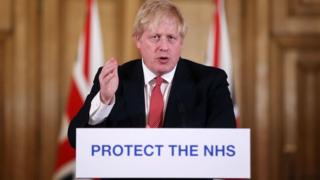 The government said: "We want to get all children and young people back into education as soon as the scientific advice allows because it is the best place for them to learn, and because we know how important is is for their mental wellbeing."

What will my school be doing to stop the spread of the virus?

There are lots of important things that children, their parents and teachers can do to prevent the spread of the virus when kids go back to school.

The government has sent headteachers and school staff lots of information on how to prepare schools for kids coming back. We've picked out some of the key advice here, but it is worth remembering each school has to prepare differently.

This is because there are of lots of differences between schools, such as the size of school buildings, the number of pupils, class sizes and how many teachers and teaching assistants can come back to work.

Here are a few things that might look a little different:

How big will my class be? 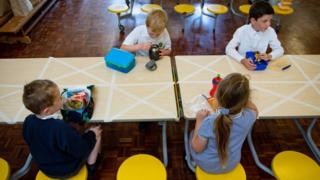 PA Media
Some primary schools have already introduced social distancing during break times, such as this primary school in Worcester

The government knows that it can be difficult for children to remain two metres apart from each other and staff - and aren't expecting younger children to do this all day.

So it has advised that the schools stick to hygiene measures as best they can.

For slightly older children, it suggests that pupils are put in small groups and if they can keep two metres away from each other, they should do so.

There shouldn't be too much worry about brief contact, for example, passing someone on the corridor. The government says the science suggests that this is low risk.

For primary schools, classes should normally be split in half, with no more than 15 pupils in each group with one teacher.

Will my teachers wear masks, and do I need to?

The government says wearing a face covering or face masks in schools or other education settings isn't recommended.

It says that cleaning, hygiene and social distancing where possible are effective measures in controlling the spread of the virus.

Wearing protective equipment in school is only needed in a very small number of cases.

What else do I need to know? 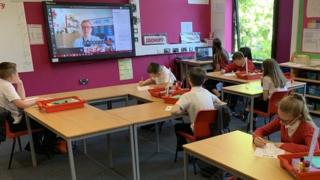 A school in Tamworth with pupils back in class

Your school and classroom might look a bit different than normal but it's nothing to be worried about.

The government and your teachers are just making sure your learning environment is as safe as possible.

If you have any worries or concerns - make sure you speak to a teacher, parent or adult that you trust.

And there are some great tips here if you're worried about coronavirus.

Coronavirus: Which shops will open on 15 June?

Coronavirus: When will schools go back?

204 comments
Back to top
unknown