Anti-racism protests and demonstrations have been taking place around the globe.

The protests began in reaction to the death of a man named George Floyd in Minneapolis, in the United States, after he was stopped by police.

Four officers were sacked and later charged in connection with his death.

There followed several nights of protests - and some violent clashes between police and protesters - as demonstrations swept across cities in the US. 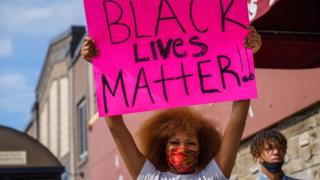 While many were peaceful, some places have seen rioting, looting and violence. In response US President Donald Trump said he would call in the army if things weren't brought back under control.

However, in recent days the protests have been mostly peaceful, and some of the security measures such as curfews have now been lifted.

The protests have also spread around the world, including to here in the UK.

So why is this happening? Here's what you need to know.

Eighth night of US protests in pictures

What happened to George Floyd?

Four police officers have been sacked. One of them, Derek Chauvin, has been charged with second-degree murder. Three others, Thomas Lane, J Alexander Kueng and Tou Thao, face charges of aiding and abetting. 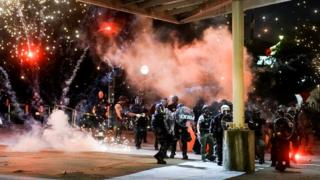 Getty Images
A firework explodes near police in Atlanta

His death led to large protests in Minneapolis, some of them violent, which then spread to many of America's biggest cities.

Many protests were peaceful but there was also violence and the burning and robbing of stores by some people involved. Bottles, bricks, flares and even firebombs were thrown. 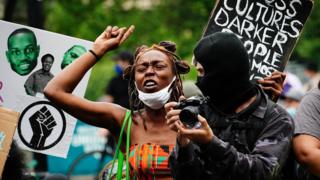 Shutterstock
More protests have been happening in other cities like New York, Denver and Los Angeles

Water cannons were used against protesters and tear gas (which makes it hard to breathe) sprayed. Officers also fired rubber bullets into the crowds. Some people were injured.

Curfews, which are rules that mean people aren't allowed outside after a certain time, were put in place in several cities, but were ignored by lots of the protesters.

As the protests have become more peaceful, some of these measures have now been lifted.

Why are these protests happening? 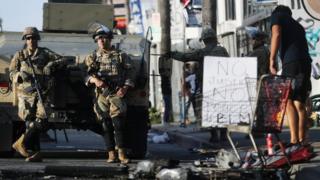 This is not the first time that the police in the US have been accused of being racially motivated, or using unnecessary force against black suspects.

The Black Lives Matter movement began back in 2013 after a man called George Zimmerman was cleared of murder charges after he shot an African-American teenager called Trayvon Martin.

Angry protests over the treatment of black men by white police officers have happened several times in recent years - for example in Ferguson after an officer wasn't punished for killing a black teenager.

Many people in America feel the police and the justice system treat black people unfairly compared to how they treat white people - African-Americans are five times more likely to be sent to jail than white Americans, for example.

Minneapolis Police chief Medaria Arradondo said his department would be conducting a full investigation into the events leading up to George Floyd's death.

The state of Minnesota has launched a civil rights investigation into the Minneapolis Police Department, aiming to root out "systemic racism that is generations deep," Governor Tim Walz said.

Being Black in America should not be a death sentence.

How has President Donald Trump reacted?

President Donald Trump has said George Floyd's death was a tragedy: "The death of George Floyd on the streets of Minneapolis was a grave tragedy. It should never have happened. It has filled Americans all over the country with horror, anger and grief."

He has also been very critical of the fact that the protests are still happening, saying they make the cities' authorities look weak.

This has shocked many people as calling the army into the streets is a big step for a president to take.

Although many people support Mr Trump's tough stance, others have criticised him for using violent language instead of focussing on trying to find a peaceful way out of the situation.

His tweets have been criticised for encouraging violence and some have been hidden from view on his timeline by Twitter.

Some people are also questioning the president's views, referring to previous comments where Mr Trump was supportive of white protestors, during race-related protests in another city called Charlottesville, in August 2017.

What about George Floyd's family? 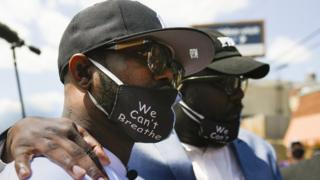 The brother of George Floyd has called for a stop to the violent protests.

He said that his brother would not have wanted violence and people should "do this another way".

Speaking through a megaphone, Terrence Floyd spoke at a memorial for George, saying: "In every case of police brutality, the same thing has been happening: Y'all protest; y'all destroy stuff, and they don't move. "

Terrence went on to encourage the crowd to vote and educate themselves. "Let's stop thinking that our voice don't matter and vote," he said.

How have other people been reacting to the protests?

Many celebrities have spoken out about the death of George Floyd and what has happened since.

US stars like Beyoncé , Cardi B, and Rihanna have taken to social media to protest about what happened.

Beyoncé said: "We need justice for George Floyd... I'm not only speaking to people of colour; if you're white, black, brown or anything in between, I'm sure you feel hopeless by the racism going on in America right now. No more senseless killing of human beings, no more seeing people of colour as less than human." 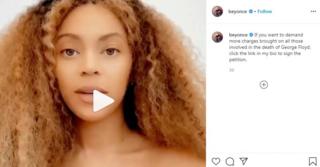 Stars like Ariana Grande, Cole Sprouse and Michael B. Jordan have gone out and joined peaceful protests.

Another way the entertainment world showed its concern, was on 2 June many record labels, musicians and other celebrities pledged to take a break from their social media using the hashtag #BlackoutTuesday.

"When sometimes I feel despair, I just see what's happening with young people all across the country, and the talent, and the voice, and the sophistication that they're displaying and it makes me feel optimistic. It makes me feel as if this country's going to get better."

Reaction around the world

There have been peaceful demonstrations about the issue all around the world, including London, Rio de Janeiro, Berlin and Auckland.

The world of sport has also spoken out about what's happened.

Players from Premier League teams such as Newcastle, Liverpool and Chelsea have all knelt in protest - a gesture made famous by former San Francisco 49ers quarterback Colin Kaepernick as a protest against racial injustice and police brutality. 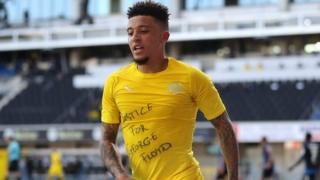 England forward Jadon Sancho was booked for unveiling a 'Justice for George Floyd' T-shirt after scoring for Borussia Dortmund on Sunday.

Tennis star Serena Williams posted a video on Instagram that featured a young African-American girl overcome by emotion as she addressed a public meeting, finally able to force out the words: "We are black people, and we shouldn't have to feel like this." 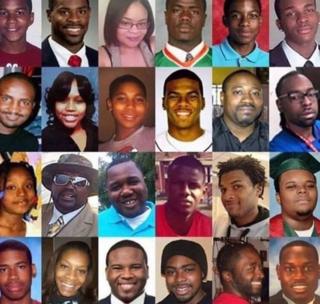 Instagram/CocoGauff
Coco Gauff posted this image on Instagram, with the caption: "When will it stop? When will we be seen as human and not a threat?"

Another tennis player, Coco Gauff, urged her social media followers to "demand justice for George Floyd". The 16-year-old posted the faces of black Americans who died in recent years allegedly at the hands of authorities or white fellow citizens, asking: "Am I next?"

The killing of George Floyd is now subject to a court case and because of that posts may be failed or edited if there are legal issues.

US protests: An eighth night of demonstrations in photos

743 comments
Back to top
unknown