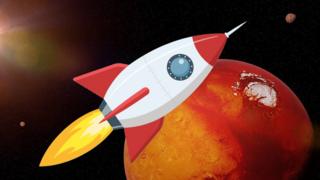 Humans aren't strangers to space, but when will astronauts get the chance to explore Mars?

NASA is looking into just that and it's currently preparing to send humans to the red planet.

The once-in-a-lifetime trip won't be happening just yet, but the space agency is offering people the chance to have a taste of what the mega journey to the planet might be like.

Researchers at NASA want to find out how humans would cope being stuck inside a tiny spacecraft for a long period of time on the way to Mars.

They're now looking for a group of six people to take part in a study to find out.

Mud on Mars 'bounces' and flows 'like boiling toothpaste'

Check out this amazing moon map!

Those who successfully make it through the selection process will have to spend eight months in a craft with very limited space.

The experiment will take place in Moscow in Russia and those who fancy getting involved will have to pass a physical and psychological assessment to qualify.

They'll also need to be an American citizen between the ages of 30 and 55, be fluent in English and Russian and be able to demonstrate certain technical skills.

Would you be up for taking part in such a mission if you could? Let us know in the comments!