Bees: How do they get plants to flower early? 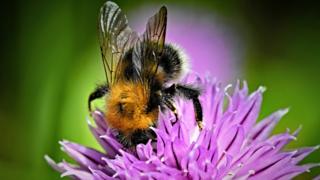 Buzzing bumblebees are one of the many signs that spring has arrived.

Like many insects and animals, bees hibernate during the colder months. But as it gets warmer, you might see them bobbing along when you're out on a walk or in the garden, landing on flowers where they collect pollen and nectar for their food.

However, what do hungry bumblebees do when they wake up from their deep sleep too early?

Well, a group of scientists have found that the insects get up to some very bee-zarre bee-haviour!

Birds to enjoy during a daily walk

They found that bumblebees can trick plants into producing flowers early by nibbling tiny holes in their leaves.

This forces the plants to bloom and make pollen up to a month early, providing some much-needed food for the bees.

However, this isn't the only thing that makes plants flower earlier than normal.

The team who made the discovery tried to recreate the results by making holes in the leaves too, but they didn't get the same response from the plants as the bees.

It's the first time researchers have looked at this behaviour, and they're still not sure what exactly the bees do to make the plants bloom earlier than they normally would.

They believe the black and yellow insects may have a special chemical in their saliva which encourages plants to flower when they pierce them - would you bee-lieve it!