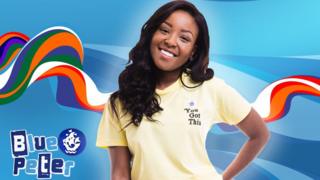 Blue Peter has a new presenter! Mwaka Mudenda, known as Mwaksy, will be joining the CBBC show from Thursday.

With all the presenters working from home, Mwaksy will join her fellow presenters Lindsey, Richie and Henry the dog on screen from her house, rather than in the famous Blue Peter studio.

But that doesn't mean she's be able to chill on her sofa and take it easy!

Why tonight's Blue Peter is going to be a bit different

She's already been set the challenge of trying to break a world record on her very first show, and she won't have any idea in advance of what it might be.

Are you excited to meet Mwaksy? Let us know in the comments, and tell us what you'd like to see her doing on the show.

Blue Peter has been on TV for more than 60 years, with the very first programme airing on 16 October 1958.

This makes it the longest-running children's TV show in the world. Wow! 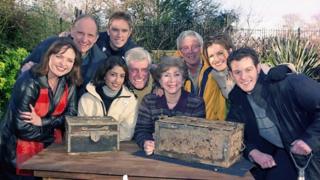 Twenty-five-year-old Mwaksy will be the show's 39th presenter.

She loved Blue Peter as a child and said she'd always wanted a Blue Peter badge - but being on the show is even more exciting!

Mwaksy said it was "mind-blowing" to be joining the team, and was "more than thrilled".

She said: "Despite lockdown, I've felt so welcomed by the incredible behind-the-scenes team that help run and deliver such a wonderful show - and I already feel like a big part of the Blue Peter family.

I'm so excited to begin my adventure, with all the fun challenges it has in store.

"The chance to be a part of such a well-loved programme that has such an inspiring and creative young audience is a real blessing."

Before joining Blue Peter Mwaksy worked at BBC Sport, but her role was behind-the-scenes rather than in front of the camera.

Get to know more about Mwaksy

BP boss Ellen Evans, said: "It's going to be an extraordinary launch for Mwaksy in extraordinary times, she has had to do her first show - and her first Blue Peter presenter challenge - from her home.

"But I have been blown away by her positivity, her warmth, her humour and her willingness to give things a go so she'll fit perfectly within the Blue Peter family."

Blue Peter is on CBBC every Thursday at 5.30pm and you can also catch-up on BBC iPlayer.

73 comments
Back to top
unknown

Why do the clocks go back?

New film Over The Moon released