Gui Khury, an 11-year-old skateboarder from Brazil, has become the first person ever to land a 1080 on a vertical ramp.

It's a move so difficult no on else has ever done it - child or adult! It involves making three rotations before landing.

American professional Tom Schaar is one of the few to have completed a 1080, but he used a special ramp that meant he could drop in from 20 metres up to help him reach a higher speed.

Gui just used typical half-pipe like the one you have at your local skate park!

What does skater Sky Brown think about the Olympics being postponed?

Meet Lola - the skater with a secret weapon

It is even further than the legendary Tony Hawk has managed. His best is a 900-degree turn in 1999.

This isn't the first time Gui has surprised everyone which his amazing talents - he was already the youngest skateboarder to complete the 900-degree turn, which he did aged EIGHT!

Gui's triple spin was recorded by his parents on their phone, and posted on Instagram.

Many famous skateboarders said they were blown away when they saw it. 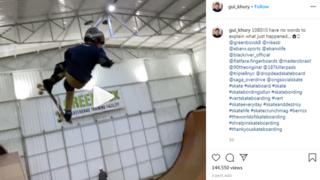 Gui Khury said: "I sent it to all my favourite skaters, like Tony Hawk, Bob Burnquist and Neal Mims,"

It's so amazing. It's the best feeling ever.

Gui lives in Curitiba, in southern Brazil. He has spent lockdown practising his moves on a course in his grandmother's back garden.

His dad even thinks that lockdown is part of the reason Gui was able to master the 1080.

He said isolation had helped "because he had a life that was about school and he didn't have a lot of time to train, when he got home from school he was tired.

"So now he is at home more, he eats better and he has more time to train and can focus more on the training so that has helped." 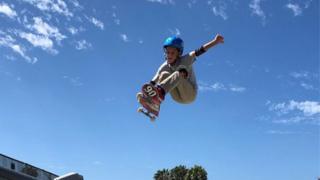 Gui has now set himself a new challenge: to keep practising the 1080-degree turn so he can complete the trick in competitions.

Then he wants to conquer skateboarding's next big move - a rotation of 1260, which involves completing three-and-a-half rotations.

Only one person has ever managed it before, and they used a mega ramp, so it would be even more difficult for Gui to complete on a vertical ramp.

We're already excited to see what other amazing things Gui can achieve!

VOTE: How has lockdown been making you feel?

Going back to school: 'I'm really excited about seeing my friends'

FA Cup set to kick off again from end of June