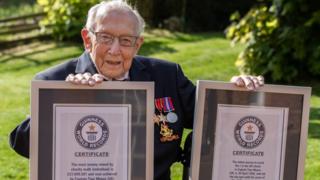 The 99-year-old former army captain is the oldest ever person to get a number one single in the UK charts, and has raised the most money ever doing an individual charity walk.

Captain Tom looped around his garden 100 times using his walking frame. His original plan was to raise £1,000 for the NHS.

His actions inspired thousands to donate and he has now raised over £27m for the NHS.

If that wasn't enough, he released a charity single version of the song You'll Never Walk Alone and it hit the number one spot in the UK charts.

The previous record holder of the oldest person to get a number one was singer Tom Jones.

"My charity walk has raised more money than I could have possibly imagined and I am so thankful to those who have donated money and bought the single so we could achieve these records together and raise money for our incredible NHS during these difficult times."

"These really are Guinness World Records titles for all of us."

Royal Mail will even be celebrating Captain Tom's birthday in their own special way, by using a special postmark wishing him a happy 100th birthday.

It will appear on all stamped mail across the UK starting next week.

There were so many birthday cards Royal Mail had to programme a special sorting machine to process all the post going to Captain Tom's house.

Captain Tom Moore: My grandad is at Number 1 in the UK charts!

YouTube: Me at the zoo - 15 years since first video published