Australia experienced the worst bushfire season ever in 2019-2020 with fires blazing for months in large parts of the country.

Around 126,000 square kilometres of land and thousands of buildings were destroyed and at least 33 people died.

Many animals were injured or killed because of the flames and the damage done to their habitat.

More about the Australian bushfires

Victoria and New South Wales were the worst affected and the situation was so bad that a state of emergency was declared in the capital city, Canberra.

Newsround went to the Blue Mountains near Sydney in February to find out what it was like for people living near the fires. 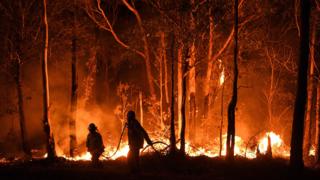 Australia is used to bushfires, they are a natural part of the country's summer season, but normally they last for a couple of weeks and are not very big.

This season they started earlier than usual, spread much faster, burned hotter and lasted longer.

There were fires from June 2019 until March 2020, with the worst of the fires happening in December and January.

Large fires burned out of control and two big fires even came together to form a 'mega blaze'. 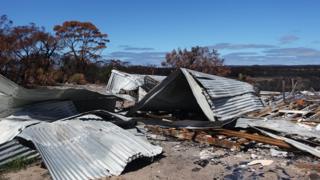 Thousands of people lost their homes and many had to leave their houses to live in temporary accommodation until the danger had passed.

Smoke caused big problems for people with some schools keeping pupils inside during breaks to protect them.

It was particularly hard for those with breathing problems, such as asthma, and lots of people wore face masks outside to try to avoid breathing in the smoke.

The situation was so extreme that the army was called in to help during the emergency and lots of firefighters and volunteers risked their lives tackling the flames.

Millions of Australian dollars were raised by pop stars like Chris Hemsworth, Pink and Nicole Kidman to help those affected. 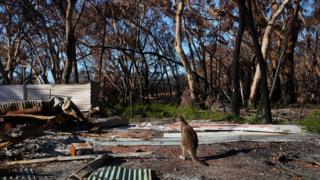 Getty Images
Kangaroos got caught in the fast-moving fires

It's thought at least a billion animals died in the fires.

Kangaroo Island off the south of Australia was particularly badly hit with around half of the island affected by the flames.

Makeshift clinics were set up to help injured animals and the army had to be brought in to help clean up after the fires.

The loss of habitat caused further problems for the animals that survived - left struggling to find food with little shelter and more vulnerable to predators.

Lots of people have been raising money to help animals affected by the bushfires, even knitting kangaroo pouches for joeys who have lost their mums.

Some koalas from the Blue Mountains were rescued before the fires hit. They were looked after at Taronga Zoo, in Sydney, and have since been re-released into the wild. 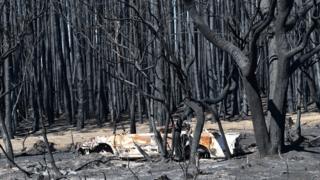 Getty Images
Trees were charred in the intense heat

Up to 70% of the Blue Mountains National Park, a popular tourist area near Sydney, was burnt. Trees and plants have been scorched by the intense flames.

Native Australian trees like eucalyptus can cope with small fires and even need heat for their seeds to be released but these fires were unusually hot and intense, causing significant damage.

Other trees are not as well adapted to heat and fire and lots of them were so badly damaged by the bushfires that they died.

Ash from the fires has also caused problems by washing into rivers, causing pollution and chemical changes to the water, damaging the fish, creatures and plants living there.

The loss of trees and plants has also made flooding and landslides more likely, as roots that help hold the soil together and plants soak up rainfall have gone, meaning the earth will wash away easily - causing soil erosion.

Although most of the bush will grow back it will take several years to fully recover.

Why was the bushfire season so bad? 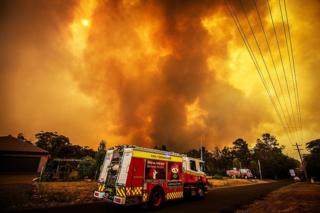 Climate change has increased the chance of bushfires by at least 30% according to a study by The World Weather Consortium in March.

Hot, dry and windy conditions made these fires bigger and more intense than normal.

2019 was Australia's hottest and driest year on record with temperatures hitting 40C and above in every state.

A scorching top temperature of 49.9°C was recorded in Nullarbor South Australia on 19 December.

These record temperatures were caused in part by an unusually strong long-term weather cycle called the Indian Dipole. 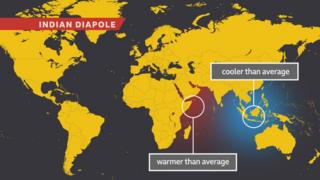 Higher than usual temperature differences between the two sides of the Indian Ocean meant flooding in parts of East Africa and a lack of rainfall in Australia.

These conditions meant that trees and plants were really dry so caught fire easily - allowing the bushfires to spread quickly.

Now the fires are over, many people say more needs to be done to tackle climate change to reduce the risk of bushfires as bad as this happening again.

Australia's economy relies heavily on fossil fuels like coal and gas and the country produces one of the highest levels of greenhouse gases per person in the world.

These gases are one of the key causes of global warming and climate change.

Climate activists have been asking the government to use greener forms of energy like wind and solar power to cut carbon emissions.

The Australian government has been criticised for how it has responded to the bushfires and for its attitude towards climate change.

Under the Paris Climate Agreement to tackle rising global temperatures, Australia set a target for 2030 of making a 26-28% reduction in its emissions compared with 2005 levels but these goals have been criticised for being too low.

Australian Prime Minister Scott Morrison has admitted there were mistakes in the government's response to the bushfires and has set up an investigation into how the crisis was handled but says the country is on track to cut carbon emissions.

Australia fires: Kids reports on the smoke and fires

Australia fires: Fear there could be a 'mega blaze'