Big Night In raises £27m for charity - Here's what happened 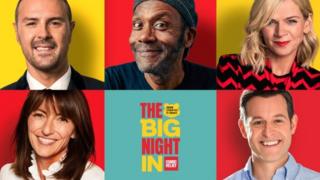 These famous faces will host the BBC's Big Night In programme

Children in Need and Comic Relief joined forces on Thursday night for The Big Night In - a charity show to celebrate NHS workers who are helping to fight the coronavirus outbreak.

The money raised will go to charities that support vulnerable people around the UK whose lives have been affected by the coronavirus pandemic.

The government has said it will double the money raised by The Big Night In.

But what happened on the show...

Things to do while you're stuck inside

Celebs to offer lessons at home with BBC Bitesize 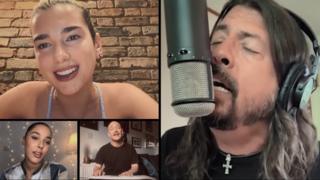 The show was presented by Matt Baker, Zoe Ball, Sir Lenny Henry, Paddy McGuinness and Davina McCall, who made sure they stood two metres away from each other as part of social distancing rules.

Artists like Dua Lipa, Rita Ora and 5 Seconds of Summer all joined together (from home) to sing an all-star cover of the Foo Fighters hit song 'Times Like These' as part of a special charity single - they were even joined by Foo Fighters frontman Dave Grohl himself!

Ten Doctors from Doctor Who gave their thanks to the NHS for their hard work, and Prince William even made a special appearance in a comedy sketch with Steven Fry! 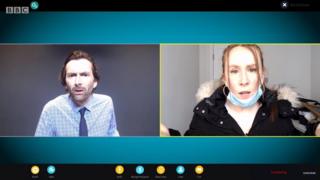 Comedian Catherine Tate brought back her cheeky schoolgirl character Lauren, for a virtual home learning session with her teacher, played by David Tennant.

After trying (and failing) to get her to try harder in her schoolwork, she persuaded him to take part in a Tik Tok duet of I Knew You Were Waiting (For Me). 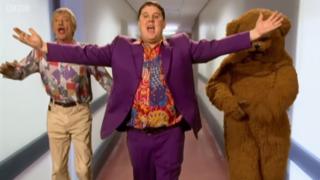 Comedian Peter Kay also brought back his comedy cover of (Is This The Way To) Amarillo.

He danced and mimed along to the song 15 years ago for Comic Relief and it went to number one in the music charts!

This year he was joined by key workers and special guests from all over the UK. 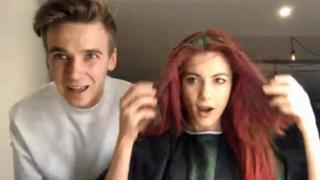 When it was revealed, host Davina McCall cried: "Oh no! It's completely lopsided!" Sir Lenny Henry said: "It's bad... You look like Billie Eilish's gran."

They were some of the top moments from the night, but we want to know what was your favourite bit? Let us know in the comments below.

Marcus Rashford wants to get everyone cooking healthy food