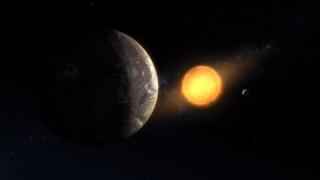 Nasa have made an unexpected discovery - a possible new planet!

The US space agency have named it Kepler-1649c and it was spotted when scientists were going through old data from the Kepler space telescope.

The planet looks similar in size to Earth but it's an exoplanet, meaning it orbits around a star in another solar system rather than around our Sun.

People can vote to name a new planet!

Although a computer had gone through all the telescope's data previously, its algorithm - which processes and analyses information - misidentified the exoplanet, meaning it wasn't noticed until now.

This isn't the first time a planet similar to earth has been found, but this new planet it is the most similar to Earth of any planet discovered, in terms of its size and estimated temperature. 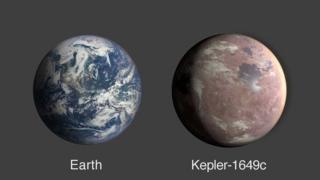 Nasa's scientists are even wondering if there could even be life there.

That's because the orbit of this particular exoplanet is within its star's habitable zone - so the temperature there is mild enough to allow a rocky planet to support liquid water - which is essential for life.

The Kepler space telescope explored galaxies for nearly a decade and found thousands of new planets and more than half a million stars before retiring in 2018.

While other exoplanets may be more similar to earth in terms of size or temperature, scientists have never before found a combination of those two qualities for a planet which also sits in the habitable zone.

The planet is 300 light-years from us, is a little larger than Earth and receives about 75 per cent of the light that we get from the Sun.

That means the temperature could be similar, too, allowing for the conditions required for life. 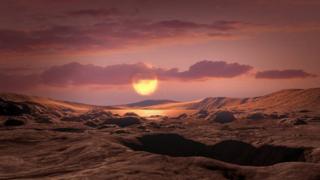 However scientists are concerned that its star could be a red dwarf.

Unlike Earth's stable Sun, red dwarf stars are known for throwing out stellar flare-ups - big blasts of heat - that could destroy any potential life before it takes hold on the planet.

Scientists are hoping to learn more about the planet, and even if it turns out to be too hostile to support life, the discovery is still important.

It supports growing evidence that planets like this are relatively common around red dwarfs and it has given Nasa hope that there are even more "amazing discoveries", including new planets, still to be found by probes like the Kepler and its replacement planet-hunting satellite TESS.

Thomas Zurbuchen, from of Nasa's Science Mission Directorate in Washington said: "This intriguing, distant world gives us even greater hope that a second Earth lies among the stars, waiting to be found."

Nasa: The Mars helicopter has completed its tests - and is almost ready for take off