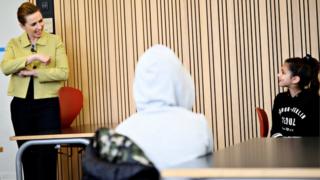 Schools and nurseries across Denmark have started reopening after being shut for more than a month due to the coronavirus outbreak.

Children up to the age of 11 are returning to their classes, as the government becomes the first in Europe to relax restrictions on education.

Prime Minister Mette Frederiksen welcomed children as they went back to school in the capital Copenhagen.

Denmark was among the first countries in Europe to introduce a lockdown, with schools closed on 12 March.

The news to reopen schools has worried some people in Denmark.

"We're all a bit nervous and we'll have to ensure that we stick to hygiene rules," said Elisa Rimpler from the Danish Union of Early Childhood and Youth Educators (BUPL).

"We have a lot of washing hands during the day. We don't have masks and we have to keep a good distance from each other so that's a very difficult task." 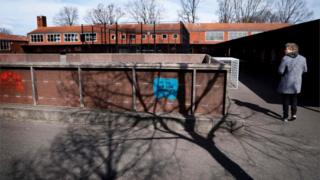 AFP
Nurseries, kindergartens and primary schools have been allowed to open their doors after more than a month

The Danish prime minister has said so much progress has been made that she was in talks about lifting more coronavirus restrictions.

But on a visit to a school in the Valby area of the capital, Ms Frederiksen said she understood that some parents still preferred to keep their children at home.

Most UK schools have been closed since Friday, 20 March, although some have been kept open to teach the children of key workers and children who need extra care.

It is not yet known how long they will remain shut for - though the government and medical experts have said they are unlikely to reopen just yet.

Coronavirus: Why are we still in lockdown in the UK?

100 activity ideas you do indoors during lockdown