Nightingale hospitals: Who is Florence Nightingale? 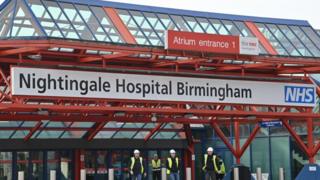 Special hospitals have been set up in the UK, to make sure there are enough wards and beds to treat those with coronavirus who need looking after.

These buildings being given special names, with several in England called Nightingale, one in Glasgow called the Louisa Jordan, and one in Cardiff called Ysbyty Calon Y Ddraig in Welsh, which means the Dragon's Heart Hospital.

In London the Excel Centre was turned into a medical facility, while Glasgow's hospital is at the enormous SEC event space.

The hospitals have been named after famous or inspiring people from history. For example, Scotland's hospital is named after Louisa Jordan, who was a nurse in the First World War who died while helping people in need. Louisa Jordan was born near to where the special hospital has been set up.

The Dragon's Heart hospital in Cardiff is named in honour of the dragon which symbolises Wales, as it represents an, "image of defence and standing steadfast in the face of adversity."

The name for the hospitals in England was inspired by the pioneering nurse Florence Nightingale.

Who was Florence Nightingale? 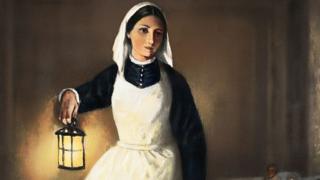 Getty Images
This is a portrait of Florence Nightingale

Florence Nightingale was a nurse in the 1900s who changed the way people nursed, stopping the spread of infection and disease in hospitals, helping to save many lives.

England's chief nursing officer, Ruth May, said it was "absolutely fitting" that the hospitals have been named after Florence Nightingale.

Ms May said that Florence Nightingale was an "iconic nursing leader of her time" and a "pioneer for infection control".

The Health Secretary, Matt Hancock, who leads the government's plans on health in the UK, said the construction of the hospitals was "testament to the work and the brilliance of the many people involved", and it showed the "best of the NHS". 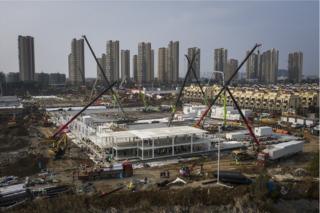 Getty Images
The hospital in Wuhan is under deconstruction

Meanwhile China is closing one of its special hospitals which were built for people who had coronavirus.

The building was made in Wuhan to help treat all of the people who had the disease.

But because fewer and fewer people there have the disease - they no longer need to use the hospital.