UK experts to meet as lockdown eases in parts of Europe 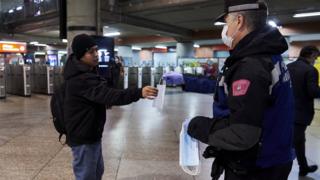 Getty Images
Police in Madrid, Spain are handing out masks to people on public transport as the strict lockdown measures are being slowly lifted.

We are all now into week four of staying at home but how much longer will we have to do this for?

Scientists say that early signs suggest the policy of social distancing has had a positive effect on reducing the number of coronavirus cases in the UK.

When they brought in the restrictions in March, the UK government promised they will review the lockdown - which they have to do by Thursday this week.

While many experts don't expect things to change, in other parts of the world things are relaxing.

What about the rest of Europe? 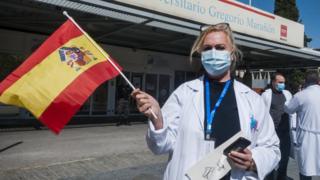 Getty Images
Staff at a hospital in Spain celebrate the drop in the rate of infection, but people still have to follow strict safety guidelines.

Ireland recently announced that its lockdown would be extended until 5 May but in Italy and Spain, the rules are being very carefully relaxed as new cases of the COVID-19 infection have decreased.

In Austria, Chancellor Sebastian Kurz announced that there would be "a step-by-step reopening," of small shops and DIY stores by 14 April, and that all shops and hairdressers would open on 1 May.

Demark has also announced that it is will reopen its schools on 15 April if there is no rise in virus numbers within the country.

In Spain, one of Europe's worst affected countries, the government have allowed builders, factory workers and others who are unable to work from home to go back to work, as long as they follow strict safety guidelines.

In Italy, Prime Minister Giuseppe Conte said last week that the lockdown would continue until 3 May, but that a few types of shops and businesses would be allowed to reopen on Tuesday 14 April.

They would include bookshops, stationers and shops selling children's clothes - but factories will not reopen. 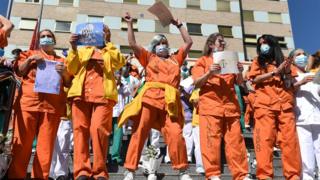 Getty Images
People must still wear face masks take special care in public places.
Does that means coronavirus is over in those countries?

No not at all. But governments are also aware that lockdown can also be very bad for people's mental and physical health if they are stuck indoors (Italy and Spain even banned outdoor exercise) or if they can't earn any money from jobs to pay for healthy food.

And just because lockdown ends, that might not be the end of the virus spreading.

For example, after parts of China lifted restrictions, (including Wuhan, where it is thought the virus began), there have been other areas of the country where new cases have been discovered.

These cases are believed to have been brought in by people returning to the country once the border with Russia was opened back up again.

What will happen here in the UK?

The truth is that at the moment we don't know.

The UK government has said it will make sure it takes advice from the scientists and experts who are studying the spread of the virus.

This means they will not lift any lockdown restrictions until it is safe to do so.

100 activity ideas you do indoors during lockdown