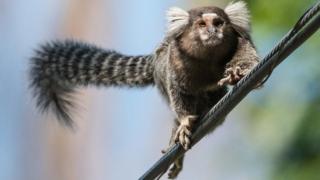 Getty Images
The monkeys are thought to have been similar in size to some marmosets like this one.

Scientists studying fossilised teeth have uncovered a staggering journey made by now extinct monkeys around 34 million years ago.

The teeth show that the prehistoric monkeys made a remarkable 900-mile journey from Africa to South America across the ocean!

Of course, there were no boats back then, and monkeys aren't known for being long distance swimmers, so how did they get there?

Well, the researchers from the University of Southern California say they must have managed to hitch a lift on floating "rafts" or small islands of vegetation that broke off from the coastlines.

Closest ever look at the Sun in super HD

How does nature help YOUR wellbeing?

Check out these amazing underwater photos 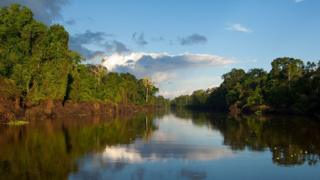 Professor Erik Seiffert, the lead author of the study, said the trip would have been "extremely difficult" but easier for the small monkeys than it would have been for other animals.

He said this was because smaller animals would have needed less food and water than the larger mammals.

The fossilised teeth were discovered in the Peruvian Amazon on the west coast of South America and were said to be very similar to those of Egyptian monkeys.

The name of monkeys, Ucayalipithecus perdita, comes from a combination of Ucayali, the area of the Peruvian Amazon where the teeth were discovered, pithikos, the Greek word for monkey, and perdita, the Latin word for lost.

Prehistoric giant lion fossil found! (Er, it was in a drawer)

Stunning photos of the ancient insects caught in amber