Stay and Play Cup: Liverpool out of Fifa 20 tournament 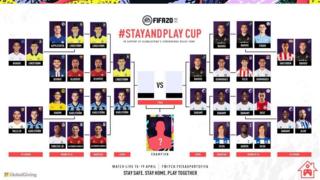 In the latest round of fixtures, Liverpool and Trent Alexander-Arnold's defeat to Jesper Karlström's Djurgarden means that all Premier League clubs have now been knocked out of the competition.

Alexander-Arnold was by far the better player, missing several chances to win the game, but a counter attack Golden Goal, the kind that even the most experienced players would rage about, won the game for Karlström 3-2.

In the other quarter final games, Nabil Bahoui of AIK thrashed Bruno Guimaraes' Lyon 4-0. Bahoui admitted that he's asking the kids in his neighbourhood to scout the opposition and send him tips!

It means we now know the teams facing each other in the Stay and Play Cup semi final matches; Lindström and Brondby face Karlström's Djurgarden, with Nabil Bahoui's AIK against Mo Daramy's FC Copenhagen.

The semis and the final will take place on Sunday night.

What is the Stay and Play Cup?

Most of the world's football leagues have been suspended due to the coronavirus pandemic.

But this gives you the chance to watch your favourite players in action - kind of!

The tournament is being live streamed on Twitch, and EA Sports - the company who make Fifa - are donating US $1million (around £800,000) to Global Giving's Coronavirus Relief Fund. 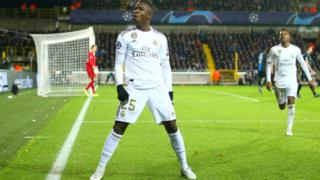 Getty Images
Vinicius Junior represented Real Madrid, until he was knocked out by Alexander-Arnold

Each match will be a 1v1 game with the winner advancing to the next round and the loser being eliminated.

So each team had better make sure their chosen player is on top form.

In the event of a draw after 90 minutes, games will be decided by extra time and penalties.

Which clubs have been taking part?

From the Premier League; Chelsea, Liverpool, Manchester City and Tottenham Hotspur have all had players taking part.

But it hasn't been going that well for the English top flight teams. Before Manchester City and Phil Foden were knocked out, Chelsea defender Cesar Azpilicueta lost 2-0 to Brondby's Jesper Lindstrom, and Tottenham Hotspur's Serge Aurier was on the receiving end of the event's first bit of extra time heartbreak, losing to FC Porto's Fabio Silva.

Which teams and players have been taking part?