Boris Johnson thanks NHS staff as he recovers at home

UK Prime Minister (PM) Boris Johnson is recovering at home after he was released from hospital following his treatment for coronavirus.

He praised the NHS staff at St Thomas' Hospital for the "brilliant care he has received".

A statement from 10 Downing Street went on to say, "On the advice of his medical team, the PM will not be immediately returning to work."

He'll be staying at Chequers, the country house that comes with the job of being PM, while he recovers.

In a video message Boris Johnson singled out and named two nurses who had stood by his bedside for 48 hours at the most important time.

He added the doctors and nurses had made decisions that he would be "grateful for [for] the rest of my life".

Coronavirus: Everything you need to know 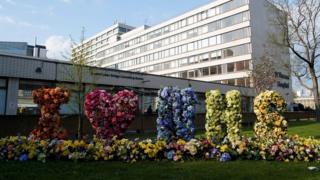 Getty Images
A colourful flower display outside St Thomas' Hospital where Mr Johnson was being treated.

The PM was admitted to hospital in London last week and spent three nights in intensive care - a ward for patients who need specialist attention.

The Secretary of State Dominic Raab is currently filling in for the prime minister, leading the government in meetings and making decisions while the PM in unable to work.

What happened to Boris Johnson? 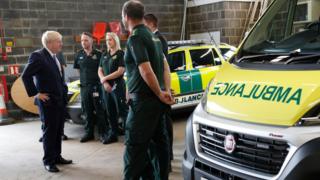 He followed the guidance of the NHS and self-isolated away from other people in his house for a week.

He felt well enough to continue leading government meetings via video calls, but his medical team advised him to go to hospital on 6 April as he had a high temperature.

Soon after he was taken to hospital, the Mr Johnson was then put in intensive care. 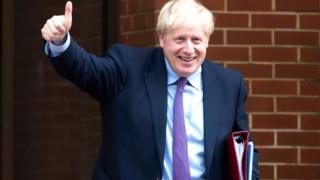 This is an area within a hospital that looks after patients that are more seriously ill - they might provide the patient with equipment to help them breathe.

However, Mr Johnson did not require extra help breathing and was able to leave intensive care after three nights.

Now he appears to be recovering well and is well enough to go home.

Dr Chris and Dr Xand: Who is to blame for coronavirus?

Coronavirus: We answer your questions about school and education