The Simpsons: Check out this family's hilarious video

If you're a fan of The Simpsons, then you're going to LOVE this!

A family in Ontario, Canada have managed to recreate the show's iconic opening sequence - complete with "Maggie" being beeped through a supermarket checkout, and "Homer" at work at the power plant.

Joel Sutherland, his wife Colleen and their three children decided to film their own version using old Halloween costumes of the characters, and props from around their home.

"We were looking for a project to keep the children busy and engaged, and [to] take their minds off all of the things they cannot do right now," Joel told Newsround.

When humans are away, the animals come out to play

The video took them two weekends to make and it was all filmed on a mobile phone.

It wasn't the easiest thing to do though. Joel said: "The scene with Homer coming out of the car, that was tricky to have my son scoot up and then my three-year-old drive the Jeep - and not hit my car - at just the right time." 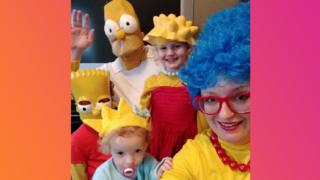 It's already had over 450,000 views on social media. The official Simpsons Twitter account has even shared it and praised the family's creativity!

Let is know in the comments what your favourite part of the video is.

How cartoon characters get their voices