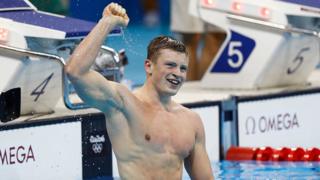 Swimmer Adam Peaty will be doing a charity cycling event to raise money for the NHS.

The Olympic gold medallist and world record holder will be joining his friend, Callum Johnson, a Commonwealth Games gold medallist in boxing, in a virtual bike ride.

They will be racing 100km on an indoor bike to raise money for personal protective equipment (PPE) for NHS workers fighting the coronavirus outbreak.

As well as riding to raise money, Adam is also putting the swimming trunks he wore when he won when he won gold at the Rio 2016 Olympics up for raffle!

"The winning entry will be drawn and announced at 9pm on Friday 10 April." said Adam.

Adam Peaty and other Olympians who've overcome their fears

Adam Peaty: Get to know the record-breaking swimmer