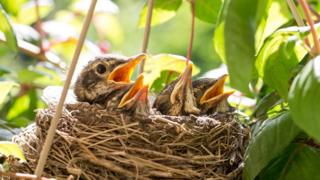 A pair of trousers, a washing machine, and an old paddling pool aren't the sort of places you'd usually expect to see a bird's nest.

But this springtime, perhaps due to fewer people being out and about, some birds have been branching out when it comes to choosing somewhere to build their home.

So far this year birds have been seen swapping trees, drainpipes and chimneys for all sorts of interesting places.

Bird charity the RSPB says that as well as the trousers, washing machine and paddling pool, some have built their nest in the hood of a gas tank, an ashtray, a bin, and on some garden furniture.

But although some of these might seem like odd and foolish choices, that is not necessarily the case. 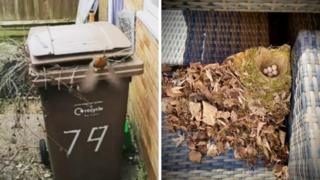 In fact, scientists think that birds can improve their nest-making skills with time, which means older and wiser birds are more likely to have an unusual nest.

With more environments like forests and woodlands being cut down and nature being squeezed into smaller spaces, sometimes birds have little choice but to try something new as they learn to adapt.

The RSPB is asking everyone to share their photos and videos of unusual bird nests they see.

Have you seen any odd nesting places near your home or neighbourhood?

The kea parrots who can make predictions

The pastel rainbow pigeon and some of world's most beautiful birds