Coronavirus misinformation: Whatsapp to limit how many messages users forward 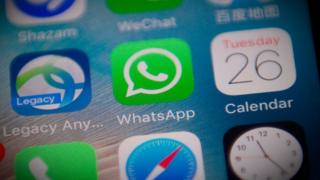 Whatsapp says it's going to limit the amount of messages users can forward to other people.

The messaging service said it wants to stop the spread of misinformation - or fake news - about coronavirus.

Facebook, the company which owns Whatsapp, said there had been a "significant increase" in forwarding during the outbreak.

A few false theories have been spread about the coronavirus - from things like where it came from to what will happen next- via social media and online.

Under the new changes, after one single message has been forwarded more than five times, people will only be able to forward it on one single chat at a time instead of five.

Facebook said it has made a similar sort of change before, and that led to a 25% drop in forwarding around the world.

The company said it knows that not all forwarding is bad, but that because of the increase in messages about coronavirus it: "Believes it's important to slow the spread of these messages down to keep WhatsApp a place for personal conversation."