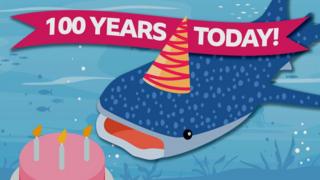 Scientists have discovered discover yet another shark that is nearly 100 years old!

Using a complicated technique called carbon dating scientists have been able to confirm something that has been long suspected... That whale sharks are really, REALLY old!

Want to know how they know? Find out more below! 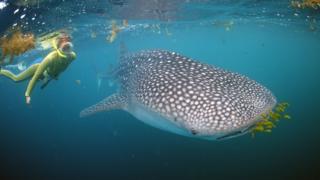 Getty Images
What is a whale shark?

A whale shark is quite literally a MASSIVE shark! It is the largest fish in the sea.

However, it is often called a 'gentle giant' as it mainly eats tiny fish, called plankton.

According to the the US National Oceanic and Atmospheric Association - they're experts about the sea and everything in it, basically - whale sharks can grow to be 12 metres long, and can weigh as much as 36,000 kilograms - yes, thirty six thousand... so they're definitely giant.

You can identify a whale shark by not only its size, but the white spots that cover its upper body. 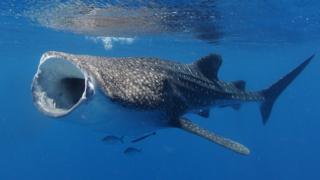 Getty Images
Why is it important to know the age of a whale shark?

Sadly, the whale shark is listed as endangered.

Knowing how long a whale shark might live is important to conservationists - because it helps them figure out if the population is getting bigger or getting smaller. 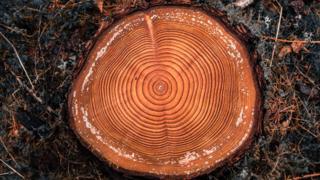 Getty Images
The rings inside a tree trunk can tell you how old that tree is
How did they do it?

Scientists were able to use carbon dating to find out how old whale sharks are.

They took two shark skeletons - and studied the rings inside the bones of these skeletons to see how old the sharks were.

The study found that a band was added to the sharks' skeletons each year, meaning that the shark with 50 bands was at least 50 years old.

Neither of these sharks were the size of fully grown adult whale sharks, so it is very likely that whale sharks can grow to be much older.

These bands can be found in all sorts of animals and plants - in fact many trees can reveal how old they are through their rings.

Rings are formed as the sharks age - so the more rings a shark has the older it is.

These rings are created when an element called carbon is absorbed.

Find out more about how scientists are able to discover how old animals and plants are!

Are there any other super old animals?

A shark thought to be 512-years-old is still alive