WrestleMania 36: Drew McIntyre is the first UK WWE Champ and five other things you need to know 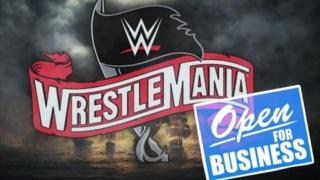 Despite almost every other sporting event being postponed or cancelled around the world, the WWE's biggest show went ahead over the weekend.

Everything at Wrestlemania 36 carried on as usual, apart from the event being pre-filmed and there were no fans in attendance because of the coronavirus pandemic.

Despite that, history was made with lots of big surprises over the two nights.

Here are six things you need to know about from the biggest (two) night(s) of wrestling in the calendar.

1. The first ever British Champion 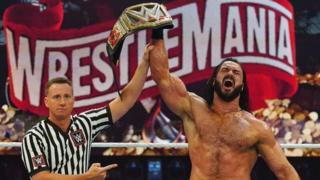 In a shock result, the "Scottish Terminator" defeated Brock Lesnar to claim the Wrestlemania Gold.

In the match it looked as though Lesnar was toying with his opponent but then out of nowhere McIntyre exploded into action and pinned the "Beast Incarnate".

Kids that have followed in their famous parents' footsteps 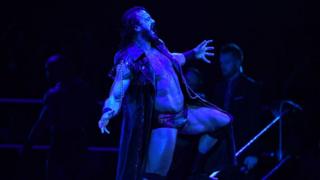 Drew, who is 34, is from Ayr on the southwest coast of Scotland.

When he first came on the scene he was called the "Chosen One" because of his promise within wrestling.

However, McIntyre was actually released from WWE in 2014 and had to watch that year's WrestleMania from Glasgow.

He's since built his way back up the ranks and has now won the biggest prize of all.

After his victory he called out heavyweight boxer Tyson Fury.

Fury accepted, so expect to see him back in a WWE ring in the not-too-distant future. 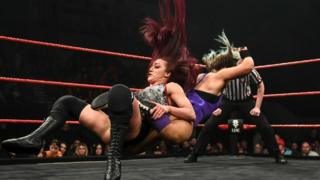 There are currently five Scottish champions in WWE at the moment.

Drew McIntyre is the WWE Champion.

Mark Coffey and Wolfgang are the NXT UK tag team champions. NXT is the feeder division for the main WWE line-up.

Kay Lee Ray is the NXT UK women's champ and Nikki Cross is one half of the WWE women's tag team champions. 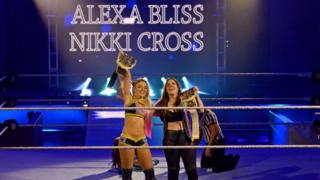 Talking of Nikki Cross, she and Alexa Bliss defeated the Kabuki Warriors to take the Women's Tag Team title.

Their rivals, the Kabuki Warriors, dominated the fight except for a few high spots from the challengers, but then Alexa Bliss sealed the surprise win!

They are the first ever two-time Women's tag champions 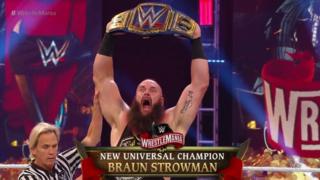 Braun Strowman is the new WWE Universal Champion after coming back from four spears to beat Goldberg.

WCW legend Goldberg was due to face Roman Reigns in a huge title fight.

However, the Big Dog pulled out because of coronavirus. Reigns, who has had leukaemia - a type of cancer - on two occasions, said he didn't want to risk his health by taking part.

That left the door open for Strowman, and he made no mistake after being given the opportunity to step-in.

The "Monster Among Men" won the belt for the very first time to end Goldberg's 36-day rein as champ. 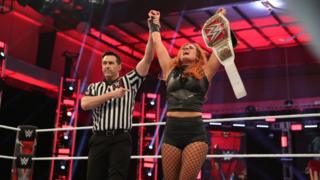 Becky Lynch was all about proving she could stand up to former MMA star Shayna Baszler for the Raw Women's Title.

Both women came out scrapping but after a real back-and-forth match Lynch escaped from Baszler's hold and secured victory.

That means she is just the second woman in WWE history to win a championship at one WrestleMania and defend the SAME title at a different WrestleMania.

The event was originally supposed to take place in a big 65,000 seat stadium, the Raymond James Stadium in Florida.

It's home to American football team the Tampa Bay Buccaneers - that's why the WWE was using a pirate theme for the event.

However, due to the coronavirus pandemic, it was instead pre-recorded and moved to a training centre in Orlando, Florida.

WrestleMania normally takes place over one night, but because of the unusual circumstances, this year match-ups took place over Saturday and Sunday. 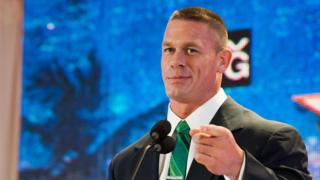 Getty Images
John Cena was back for WrestleMania36

Speaking to his 2.5million followers, he said: "It was a hell of a ride." 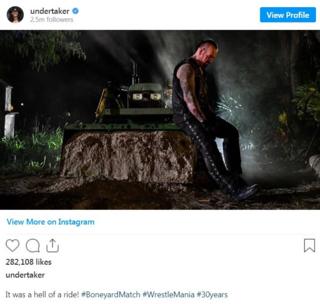 The former New England Patriots player Rob Gronkowski had a starring role to become the 24/7 champion - he pinned his friend Mojo Rawley to take the title.

You can stream Trolls World Tour at home on demand