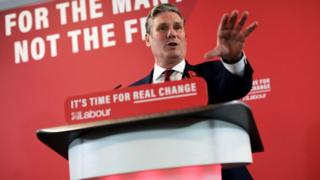 The Labour Party has elected a brand new leader.

Sir Keir Starmer will take over from Jeremy Corbyn as head of the political party, after a three month-long contest to choose the new person.

Jeremy Corbyn, who became the Labour Party's leader in 2015, announced he was stepping down from the role after Labour's defeat in last year's general elections.

Want to know more about the Labour leadership race?

Who's in the running to be Labour's next leader?

How was the new Labour leader chosen?

The polls closed earlier this week, and now Sir Keir Starmer has been announced as the winner.

Labour's new leader tweeted a video following his win where he said it was the "honour and privilege of his life" to be elected as the new Labour leader. He also said that it had come "at a moment like none other in our lifetime", because of the impact of the coronavirus.

Angela Rayner was elected as the party's new deputy leader.