There is a military service law in the footballer's home country which says that all young men who don't have a disability have to serve in the military before they get to the age of 28.

Son has to complete this service as soon as possible because he will be 28 in July.

The law says that people have to serve for almost two years, unless they have made huge achievements in sport or art. In 2018, Son captained his country to gold at the Asian Games, which counts as an achievement which 'raised the national profile', meaning he only has to do four weeks' service. 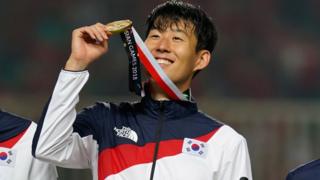 Son will return to London after he completes his military service in May.

The footballer is not the only celeb who has to do military service, in 2019 it was confirmed by the South Korean government that K-pop group BTS had to serve in the Korean military too despite protests from their fans.

What do South Korean kids like and dislike about K-pop?