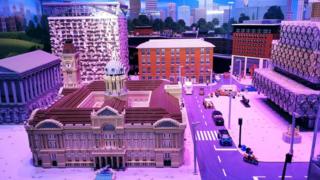 LEGO Discovery Centre
This scene of Birmingham Art Museum is usually busy with people, but now the miniature figures have been removed to reflect the reality of the city's streets

A Lego replica of Birmingham has had thousands of minifigures removed to reflect what the city looks like in real life as people stay indoors and self-isolate.

Master Model Builder at the children's attraction, Michele Thompson, removed the minifigures just moments before the centre closed its doors to the public.

Once a bustling scene made of over 1.5 million bricks, the photos of it now reflect the city's empty streets as millions of people are asked to stay at home.

More on self isolation 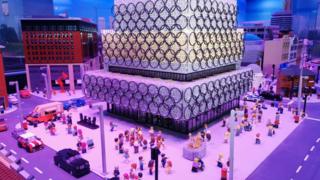 The Legoland Discovery Centre decided to release the images now to "support the message of how important it is to stay inside".

The miniland was once filled with tourists, school groups, commuters and construction workers, but now that streets are empty and roads are quiet, the team decided to take the minifigures out.

It was a sad moment taking the minifigures out but we felt it was the right move.

Talking about the decision, Michele Thompson said: "Whilst we are closed, the minifigures will be stored safely in our workshop and it really will be a huge celebration when we can decorate miniland with its residents again. We'll definitely be feeling a sense of pride."

The miniland houses the region's most popular buildings and landmarks made out of Lego, including the Birmingham Mailbox, Warwick Castle and Spaghetti Junction - that's the road network outside Birmingham that looks a bit like the long pasta!

Coronavirus: How watch parties help to stay in touch

Joe Wicks: Top five exercises to do at home

How animal poo can help the environment!