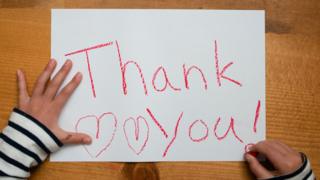 People who work looking after our health have a really important job, especially at the moment.

From doctors to nurses, pharmacists to cleaners - health workers are working really hard to look after people who are unwell.

So to show them just how much people appreciate what they're doing, here are five ways people have been saying thank you.

The girl collecting Easter eggs for the NHS

Can you spot your rainbow picture in our gallery?

Thousands of people across the country stood in their gardens, opened their windows and went out on to their balconies for a massive round applause on the Thursdays of 26 March and 2 April.

It was called #ClapForOurCarers and was to show support for everyone working in the NHS.

Did you take part? 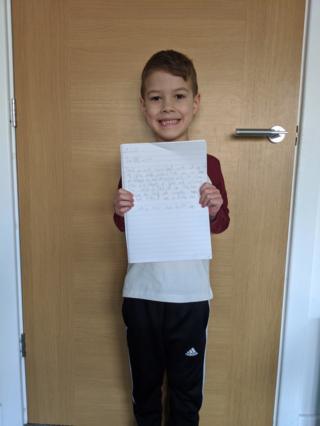 Oscar and his letter

Lots of you have been asked by your teachers to write letters to NHS staff thanking them for what they're doing.

As part of his home teaching five-year-old Oscar, who goes to Brighton Avenue Primary School, is learning about the importance of NHS workers and he wrote a letter to hospital staff after discovering what they do.

He wrote: "Dear NHS workers, Thank you for all of your hard work and for looking after poorly people. I think you are brave for helping us and other people with the virus. I am staying at home and following the rules so that I can stay safe. I am washing my hands and singing happy birthday two times. I hope you all stay safe too!"

Some people have been raising money for the NHS and its staff, while others have been collecting donations of another kind!

Six-year-old Clarissa has been getting Easter eggs to send to people working in her local hospital in Birmingham.

She's managed to collect a whopping 157 of the chocolate treats for staff there including doctors and nurses.

Forget a bottle, how about a message in a...FIELD? 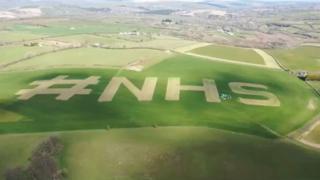 Matthew Alford from Devon had a BIG message of gratitude to share - with a little help from farmer John Govier.

He spent two hours planning and mowing "#NHS" into a field near Exmoor.

The letters are more than 100 metres high and almost 400 metres wide.

Now that's one way to get your message across. 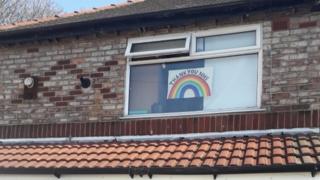 Loads of you have been making rainbows to put in your windows and outside to show support for your community and to help keep people smiling.

Some of you have even dedicated your rainbows to the NHS and its staff, to make sure they know you appreciate them!

Want to say thanks to the NHS? You can send us your messages to key workers here:

Send us your thank you messages!

Coronavirus: Can you spot your rainbow picture in our gallery?

Coronavirus: Send your thank you messages to key workers

Coronavirus: Experts say staying at home is 'making a difference' to virus spread

Tom Hanks and other celebs doing good during coronavirus lockdown

Coronavirus: The girl collecting Easter eggs for the NHS