Apollo 13: What happened to the Nasa mission to the Moon? 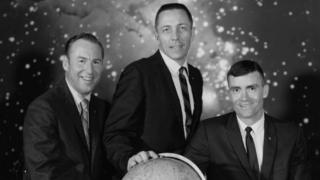 Getty Images
The crew onboard Apollo 13

On 11 April 1970 Nasa sent the Apollo 13 craft into space. The crew were excited to become only the third mission to land on the Moon.

Captain Jim Lovell and his fellow astronauts, John 'Jack' Swigert and Fred Haise, formed the crew of this exciting mission.

In 1968, Lovell had been aboard Apollo 8, which was the first manned Nasa mission to orbit the Moon. This time, he was going to get to set foot on it.

But Apollo 13 didn't go to plan. Here's what happened, and what lessons Nasa learnt from the process.

All you need to know about the Moon landing 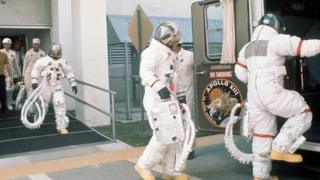 Getty Images
Captain Jim Lovell led his astronauts to the craft
What was supposed to happen?

It was supposed to be a relatively straightforward mission - to fly to the Moon, gather some information, and fly back to Earth again.

It had been a year since Apollo 11's crew became the first to land on the Moon, so Nasa was becoming comfortable with these complicated lunar missions.

At 2.13pm (local time) on 11 April, 1970, three astronauts climbed into their spacecraft at Kennedy Space Centre, Florida. The three all looking forward to joining an exclusive group of people who had travelled to the Moon's surface. 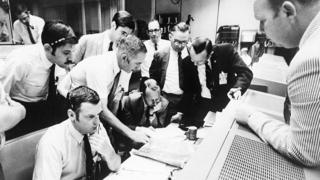 Getty Images
The crew had a lot of help from mission control, back at base

However, almost 56 hours into their journey, disaster struck. An explosion caused their vital oxygen supply to escape into space.

This ruptured oxygen tank meant the flight had to be cut short, and it threatened the lives of the crew onboard.

How did the crew deal with the problem? 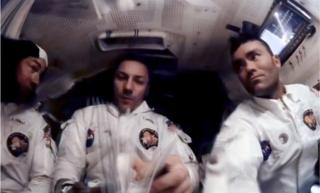 NASA / Andy Saunders
(L-R) Lovell, Swigert and Haise sit together in the command module as they prepare for re-entry through Earth's atmosphere

They immediately told mission control back on Earth and Jack Swigert said the now famous phrase: "Houston, we've had a problem".

Because one of the oxygen tanks was broken the crew faced the prospect of running out of oxygen to breathe.

However, the oxygen supply was also critical to supplying all the power the ship needed to do things like steering.

They made the quick decision, between themselves and mission control, to turn off all electrical equipment.

This allowed them to save as much oxygen as possible. However, it meant the crew had to deal with things like extreme cold, because all the heaters had to be turned off.

Lovell, Haise and Swigert also had to work out how to conserve water, and make their food supply last. The three astronauts drank only a fifth of their normal water supply, and ate things like hot dogs and packets of 'wet' food to help them survive.

And how did they land? 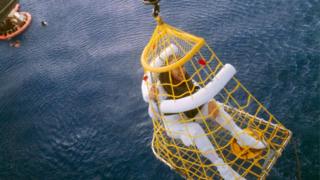 In order to stay alive, the astronauts had to move into a smaller craft, the Apollo Lunar Module, and made it work as a sort of lifeboat.

When they approached Earth they weren't sure whether their parachutes - needed to slow down the Command Module - would work.

But the crew managed to land safely back on Earth. They landed in the South Pacific Ocean where a team were waiting to help them.

So, it wasn't a successful flight? 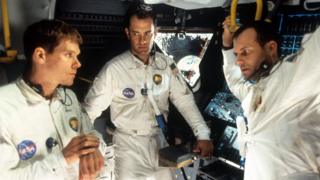 In one way it wasn't - because Apollo 13 didn't complete its mission, which was to land on the Moon and come back.

But others say it was one of Nasa's greatest accomplishments because three crew returned, in a very damaged spacecraft, back to Earth safely.

Books have been written about the event, including by the captain himself, Jim Lovell.

And a film was made about it too - starring Tom Hanks.

What changes were made after Apollo 13? 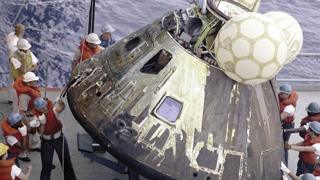 Nasa learnt a lot of lessons from the Apollo 13 flight.

Loads of design changes and adjustments were made to make sure the same mistake didn't happen again.

An additional oxygen tank was added to all spacecrafts, and was designed so that it could be isolated to only supply the crew if necessary.

Did a huge collision between the Earth and a planet-sized rock create the Moon?