Coronavirus: What lockdown is like for kids all around the world 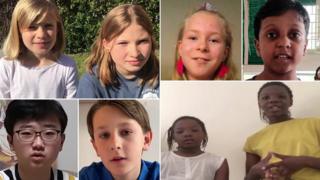 When you spend so much time at home it can be easy to forget that coronavirus is affecting people all over the world.

Lots of children in lots of different countries are living life in lockdown.

So we've been catching up with some of them to see what life is like for them.

The restrictions are slightly different in every country, but it normally means that people aren't allowed to leave their homes unless they have a good reason - like buying essential items, exercising, or walking the dog.

Let's meet some Newsrounders from around the world!

In late March the government there introduced a strict 15-day lockdown requiring people to stay at home.

This has now been extended until 11 May.

Police have been patrolling streets issuing fines to anyone who hasn't signed a special document explaining why they need to leave their homes.

People are being allowed to go outside to exercise but have to go alone, and aren't allowed to do so between 10am and 7pm.

Ali lives in the capital, Paris, and she told us what life has been like there.

Italy was the first country in Europe to go into lockdown, with restrictions on movement rolled out across the country in early March.

Schools and universities were closed, with children like Rosa and Maya experiencing home schooling for the first time.

The lockdown rules were very strict, with people having to fill in a form to explain why their travel was essential.

The public were not allowed to leave their homes unless it was considered essential, and most shops, bars and restaurants shut down almost overnight.

The new rules were originally planned to be in place for three weeks but were extended. However since Easter some rules there are being slowly relaxed.

Prime Minister Giuseppe Conte said last week that the lockdown would continue until 3 May, but a few types of shops and businesses were allowed to reopen from 14 April.

They include bookshops, stationers and shops selling children's clothes - but factories will not reopen.

But being at home all the time isn't all bad.

Parents Jessica and Soren, and children Sophia and Sebastian live in the capital, Rome.

They said that while the new measures took some time to get used to, they've enjoyed spending more time together as a family.

Germany has closed schools, restaurants and shops to tackle the crisis, but hasn't introduced a total lockdown to stop people leaving the house like in Spain, France or Italy.

Instead the government has been encouraging people to stick to social distancing and has introduced a ban on people meeting in groups of more than two.

This class of Year Fives at a school in Cologne tell us how they've been finding it.

Now Chancellor Angela Merkel, who is in charge of the country, has announced plans to slowly ease restrictions.

Social distancing rules will stay in place until at least 3 May, with Ms Merkel also recommending the use of face masks in shops and on public transport.

Spain is the only country in Europe where children cannot leave home at all, and so Spanish children like Evan have been having lessons at home since mid-March.

The country is now nearing its fifth week of emergency lockdown measures introduced on 14 March.

Spain's lockdown rules have been some of the strictest in the world with people only allowed to leave their homes to get essential items or to walk their dog.

The only travel allowed is to supermarkets and pharmacies, and if stopped by the police the public must prove that's where they are going.

Although the government have recently allowed builders, factory workers and others who are unable to work from home to go back to work, as long as they follow strict safety guidelines.

Since the end of March, Ireland has been under similar measures to the UK.

Eabha is 11. Her school in Dublin is closed, so she's been doing all her schoolwork at home with her mum and dad.

People have told to stay at home until at least 5 May unless they are buying groceries, attending medical appointments, collecting medication, getting brief exercise or making essential family visits.

The rules are slightly different depending on where in Australia you live.

Ava and Leo have been at home for more than three weeks, and say they might be at home for the next three months because of coronavirus measures.

Under the rules it's illegal for anyone to leave their home unless it's for an essential purpose - shopping for food, exercising, medical care, and working or studying that cannot be done from home.

But in other areas the lockdown is much shorter and some states haven't gone into lockdown, although this is likely to be reviewed if the situation changes.

South Korea was one of the first countries to report cases of coronavirus, but the country hasn't introduced a total lockdown, although some people have been choosing to stay at home.

Schools have closed, so children like 13-year-old Seong-ju took classes online instead.

Shops, restaurants and parks are still open, and people only have to stay at home if they're self-isolating because they are ill or have come into contact with someone else who might have the coronavirus.

Instead of a lockdown the government has issued social-distancing guidelines, as well as testing almost everyone in the country to see who has the virus. They have also used technology like smartphone apps and sent alerts to let people know if they might have been in contact with someone who has the virus.

On 25 March India's population of 1.3 billion people went into complete lockdown for three weeks, the biggest lockdown in any country since the coronavirus began. It will stay in place until 3 May.

With schools closed, seven-year-old Kavin has been spending lots of time at home with his mum and dad. He's an only child, and misses his friends from school and cousins who he says are like his brothers and sisters.

But lockdown has also left millions of people without jobs and forced some to flee cities to their villages in search of food and shelter. Public transport has also stopped which means people have to walk very long distances often with their whole families.

It's also been hard for lots of people in India to stick of the guideline on social distancing, because of the huge numbers of people living closely together, especially in big cities like Delhi and Mumbai.

Zimbabwe started a 21-day lockdown on 30 March, and it is due to end this weekend.

Munashe and Ruvarashe live in the capital Harare and are worried about how their schoolwork is being affected by the lockdown.

Ruvarashe was also disappointed that the crisis has meant she can longer go on family holiday for Easter.

As with India, lockdown in Zimbabwe has meant many people have lost their jobs and it's become hard to buy food in some places. Before the coronavirus pandemic, the country already had food shortages.

Now food has become even more expensive, so some of the lockdown rules have been relaxed to allow farmers to work and produce more food.

Coronavirus: What are people across the world doing while they're in lockdown?