Roxanna Howlett might only be 10 years old but she is already taking the skateboarding world by storm.

The event had been due to take place in Manchester but was cancelled and replaced with an online contest.

But who is she? We've got it covered below.

What does skater Sky Brown think about the Olympics being postponed?

Who is Roxanna Howlett? 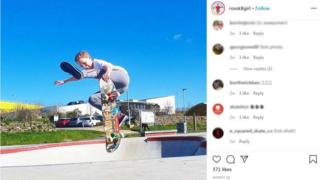 Roxanna, from Exeter, has been impressing people with her flips and tricks since she was just six years old.

She started skating after watching a video by skater Aaron Kyro on YouTube.

Her achievements over the past couple of years include taking home first place in a competition called Buckland Jam, placing first at the Exminster Skate Jam in her age category and in August 2019 she topped a competition in California!

Talking about the recent Skateboard England 'virtual' National Championships win, Roxanna said it took her just one attempt to nail the routine.

Explaining how it feels to be a national champion, she said: "I'm really happy that I've won."

Roxanna has a big following on social media and is "happy to see that people enjoy watching" her videos and that they appreciate the hard work she puts into them.