Meghan and Harry: Donald Trump 'will not pay' for royal couple in US 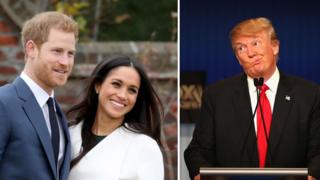 President Donald Trump says America won't pay for Prince Harry and Meghan's security if they move to the US.

There have been loads of reports that the royal couple could be moving to California, in the US, from Canada.

From the end of March, the duke and duchess will step down as senior royals and will no longer carry out duties on behalf of the Queen, but these arrangements will be reviewed after one year.

But Mr Trump may have got cross too quickly - as the couple said they had no plans to ask for the American government to pay for anything. 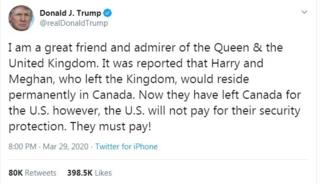 In a statement the couple said: "The duke and duchess have no plans to ask the US government for security resources. Privately funded security arrangements have been made."

Since the start of the year Harry Meghan and their son Archie have spent much of their time on Canada's west coast, following a six-week Christmas break on Vancouver Island. 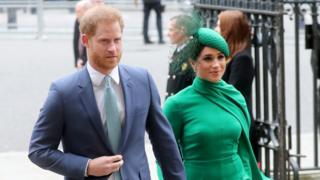 But according to royal watchers in the US media, the family moved again last week to the Los Angeles area where Meghan grew up and where her mother, Doria Ragland, now lives.