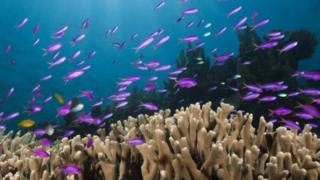 Sea creatures are moving towards cooler water nearer the North and South Poles because of rising ocean temperatures, a group of scientists have found.

Researchers from Bristol and Exeter Universities looked at data on over 300 marine species.

They spotted a pattern which shows the numbers of some plants, birds and animals were going up towards the poles but falling in habitats near the equator.

The team believe their findings show that rising temperatures in our oceans have led to widespread changes in the population size and distribution of marine species.Martin Genner from the University of Bristol said: "We found the same trend across all groups of marine life we looked at, from plankton to marine invertebrates, and from fish to seabirds."Researchers say the world's oceans have warmed by an average of 1 degrees Celsius since pre-industrial times (that's usually considered to be between 1850-1900 by climate scientists).

They found certain species to be thriving well in the cooler regions of the oceans. Rising temperatures meant it was now possible for many to survive in areas they wouldn't have been able to have lived in before.

For example, the researchers said, the populations of Atlantic herring and Adelie penguins were going down near the equator but increasing towards the polar regions.They also found conditions of habitats near the equator were too warm for some animals to handle. With global warming predicted to increase up to 1.5C over pre-industrial levels by 2050, the researchers said species are likely to undergo further shifts in population distribution in coming decades.Louise Rutterford, a study author, said: "This is concerning as both increasing and decreasing abundances may have harmful knock-on effects for the wider ecosystem."

Climate change: Meet the activist passionate about the Ocean