Greta said it was "extremely likely" she has had coronavirus

Climate change activist Greta Thunberg says young people have an "enormous responsibility" to stay home to prevent the spread of coronavirus, especially if they feel unwell or have symptoms of the disease.

The Swedish teenager has been self-isolating and admitted on social media that she had been feeling a bit ill and thinks it's "extremely likely" that she and her father both had coronavirus.

Neither of them know for sure, as tests in Sweden are only available for those with serious symptoms.

However, Greta explained that she followed advice, and isolated herself as soon as she got home from her recent European tour.

What do young British kids think of protesting with Greta Thunberg?

What did Greta say in her Bristol climate speech?

"Around 10 days ago I started feeling some symptoms, exactly the same time as my father - who travelled with me from Brussels. I was feeling tired, had shivers, a sore throat and coughed. My dad experienced the same symptoms, but much more intense and with a fever."

"We who don't belong to a risk group have an enormous responsibility, our actions can be the difference."

"Now I've basically recovered, but - AND THIS IS THE BOTTOM LINE: I almost didn't feel ill. My last cold was much worse than this! Had it not been for someone else having the virus simultaneously I might not even have suspected anything.

"Then I would just have thought I was feeling unusually tired with a bit of a cough. And this is what makes it so much more dangerous. Many (especially young people) might not notice any symptoms at all, or very mild symptoms. 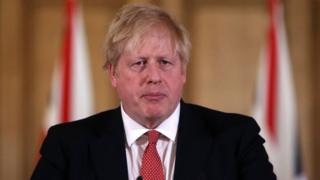 "Then they don't know they have the virus and can pass it on to people in risk groups. We who don't belong to a risk group have an enormous responsibility, our actions can be the difference between life and death for many others."

People have been asked to stay indoors by Prime Minister Boris Johnson, except for special reasons such as shopping for essential items and medicines, helping elderly or vulnerable people, or to exercise - as long as they stay at least two metres away from other people.