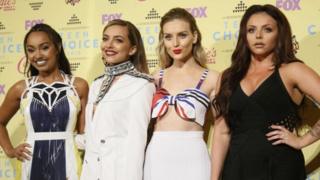 Jade has spoken out saying the group would fall apart if one of the girls quit.

She told a magazine, "It's all or nothing with us. We are sisters so if one of us left, that would be it."

The foursome shot to fame back in 2011 when they won The X Factor and have gone on to become one of the biggest bands in the world.

While another famous girl band, the Spice Girls, carried on following the departure of Geri Halliwell, Jade has ruled out the same happening with Little Mix.

Jade and Jesy also opened up about body image. having previously spoken out in the past about anxiety and airbrushing.

Jade said used to not feel confident about herself when she first got into the band, and used to compare herself to the other girls.

She says she realised comparing herself to the others is silly and she's happy with herself now.

Jesy said she used to do the same thing and can't believe she thought like that.

Their new show The Search kicks off on BBC One next month, thought the later stages have been delayed as they were due to be filmed with a live audience. That can't happen at the moment due to the coronavirus outbreak, but will happen later in the year.