Endangered African black rhino numbers are on the up 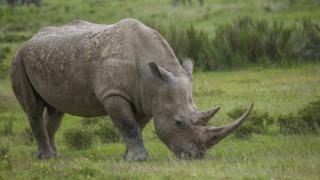 It's good news for black rhinos! Thanks to conservation work, numbers of African black rhinos are going up.

The International Union for Conservation of Nature (IUCN) says it is expecting a further slow increase over the next five years.

This rhino made an incredible journey!

The rise in black rhino numbers is mainly due to increased work to stop poachers who target the rhinos for their horns.

Poaching, when people kill the animals for their horns, is still the main threat to rhinos.

What does critically endangered mean?

A critically endangered species is defined by the International Union for Conservation of Nature as a species facing an extremely high risk of extinction - becoming wiped out - in the wild.

The IUCN also said moving selected rhinos from established populations to new locations to increase the population has also played a part.

What do you think of the good news?

What more needs to be done to save endangered or rare species on our planet?

Wildlife Photographer of the Year 2019: Check out the winning pics