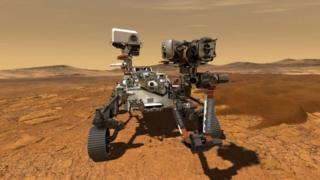 Sometimes it's the simplest solutions in life that make things work.

But, we never thought that would be the case when it comes to fixing a robot on planet Mars.

Scientists working for Nasa somehow managed to fix the Mars rover by getting it to hit itself with a shovel.

The 'InSight' lander got itself in a bit of bother when trying to dig a 15-inch (38 cm) heat-measuring probe, called 'the mole', into the soil.

How to design a Mars-proof robot

Nasa's Opportunity rover leaves us with one final photo of Mars

It happened because the soil was much lumpier than the scientists expected it to be.

After a few failed attempts to get it free, Nasa decided the only option was to whack it using the InSight's own robotic arm.

It was very risky because it could have damaged the fragile power and communication lines attached.

But the move was a success!

"Our new approach of using the robotic arm to push the mole appears to be working," Nasa's InSight team confirmed on social media.

Nasa hopes the InSight will be able to help scientists understand how similar Mars' core is the Earth's.