Harry Potter, The Gruffalo's Child and Northern Lights all up for British Book Awards prize 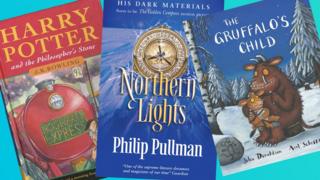 Harry Potter, Northern Lights and The Gruffalo's Child are all up for the British Book Awards "30 from 30" trophy.

The one-off prize is for the book which has had the most impact in the last three decades. It celebrates 30 years of the British Book Awards.

While most of the books are for grown-ups some pretty well-known kids' books are also included.

JK Rowling's 1997 hugely successful Harry Potter and the Philosopher's Stone is in with a good chance.

The book has been translated to around 80 languages and has sold around 500 million copies. It also led to a successful series of films, a play and a Harry Potter theme park.

It's nearly World Book Day, but how much do you enjoy reading?

What alternative ending would you choose for your favourite book?

Up against it is Philip Pullman's Northern Lights, the first in the epic fantasy trilogy His Dark Materials.

The three books have been translated into 40 languages and have sold close to 18 million copies worldwide. There's also been film adaptations and a BBC TV series.

The Gruffalo's Child, the much-loved sequel to Julia Donaldson and Axel Scheffler's bestselling phenomenon The Gruffalo, is also on the list.

And so is the less well-known illustrated poetry collection celebrating nature, The Lost Words by Jackie Morris and Robert MacFarlane.

The winning author will be invited to the British Book Awards on 29 June 2020.

Are there any other books you think should be included? What's your favourite book - let us know in the comments below.

BBC's His Dark Materials: Characters and plot - Everything we know