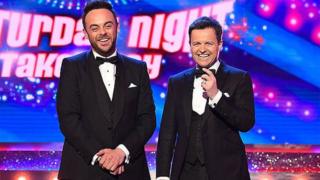 Saturday night TV might look a little different over the next few weeks.

That's because efforts to stop the spread of coronavirus means schedules are changing.

Filming for television programmes like Eastenders and Holby City has already been suspended.

And now there have been big changes to Saturday night TV too.

What other events has coronavirus affected?

Premier league, EFL and WSL suspended until April because of coronavirus

Glastonbury and Eurovision are cancelled

ITV have decided to postpone The Voice UK's live semi-final and Final until later this year.

They were due to take place on 28 March and 4 April but will be replaced with recorded, clip-based The Voice UK specials instead.

Ant and Dec's Saturday Night Takeaway will go ahead, but the first time ever there won't be a live audience.

There was some uncertainty about whether the show might be cancelled altogether, but Dec reassured people on social media by saying: "We're business as usual and will be for as long as we are able to attend."

In a statement, ITV said: "With the spread of COVID-19 increasing, inevitably our ability to produce shows is being affected and shows will not be recorded with studio audiences."

Britain's Got Talent is another programme that features a live audience, and ITV has confirmed that while the pre-recorded auditions will go ahead, it's still working out what to do about the live shows.

The broadcasters are hoping they can get back to normal scheduling as soon as possible.

If you're worried about the coronavirus, check out this video on how to keep calm:

And if you have any questions about it, see if they've been answered by Dr Xand and Dr Chris.

Coronavirus: Which TV shows have been suspended?