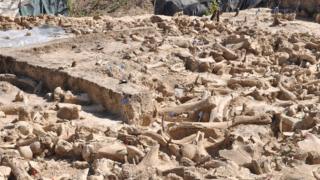 Mysterious bone circles made from the remains of mammoths may reveal how ancient communities survived the ice age.

About 70 of the structures have been found in Russia and the Ukraine. One of the circles is 20,000 years old, making it the oldest circular structure built by humans.

The majority of the bones found at the site investigated are from mammoths.

Previously archaeologists had thought the round mammoth bone structures were used as living spaces, occupied for many months at a time.

Has the oldest stegosaurus been discovered?

Although there are signs that people lived there, the archaeologist who studied the circle said there wasn't enough activity to suggest it had been used for a long-term camp.

Climate reconstructions indicate at the time summers were short and cool and winters were long and cold, with temperatures around -20 degrees Celsius or colder.

Speaking about the circle, Dr Alexander Pryor said: "Archaeology is showing us more about how our ancestors survived in this desperately cold and hostile environment at the climax of the last ice age.

"Most other places at similar latitudes in Europe had been abandoned by this time, but these groups had managed to adapt to find food, shelter and water."