Coronavirus: What are people across the world doing while they're in lockdown? 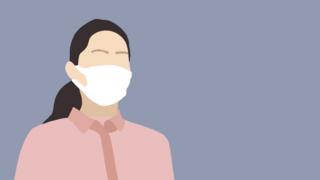 People across the world are being asked to self-isolate as their countries go into lockdown, to try to prevent the spread of coronavirus.

Being in self-isolation can feel a bit strange. Evie, who is 11 and lives in Italy, said when her country went into lockdown it "felt a bit like a holiday" but now she's getting a little bit bored.

Lots of people are finding ways to keep themselves entertained, and coming up with activities to make self-isolation a bit more interesting.

All your Coronavirus questions answered

What do quarantine and self-isolation mean?

Italians sing from their windows

People living in Italy have come up with a unique way to keep busy while they have to stay at home.

For these talented Italians, music has become a way to keep in touch and feel closer to those around them.

Many musicians are hearing applause and cheering from other flats and apartments as they play. Bravo!

Perrie posted a video of the couple performing a trending TikTok dance where people dance up the stairs to a particular song.

Her caption said: "Precautionary self-isolation can be fun."

Oxlade-Chamberlain's team-mate James Milner has also been having loads of fun at home. Kind of!

He's been sorting out his tea bags. 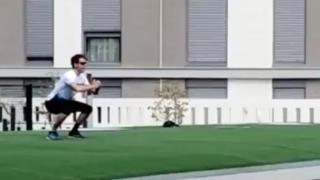 Sano Sevilla is a fitness instructor from Seville in Spain.

And even though his country is in lockdown, he's not slowing down his fitness regime any time soon.

In fact, he's encouraging his neighbours to exercise too - he led a fitness class from his rooftop and neighbours joined in on their balconies. 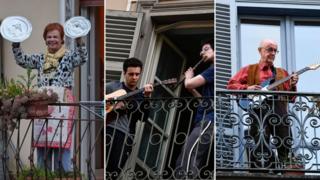 People across the world aren't letting lockdown get in the way of playing their musical instruments. 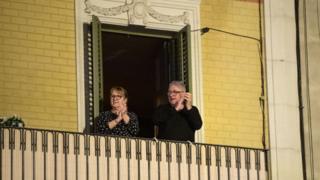 People in Madrid, Spain, came out to applaud medical staff as they went to work.

Residents clapped and cheered for health workers following a special social media campaign to show appreciation after the Spanish government declared a state of emergency.

People in Spain have been ordered to stay at home for two weeks unless they have to buy food or medicine.

Coronavirus: What's it like being on lockdown in Italy?

Coronavirus and quarantine: All you need to know about self isolation

Coronavirus: How is the virus affecting your plans?