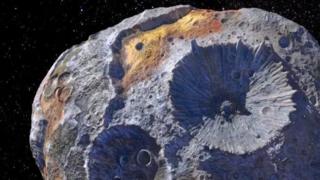 Nasa has asked Elon Musk, who owns the rocket company SpaceX, to help with a new mission.

The aim of it is to explore a giant metallic asteroid called 16 Psyche. It's often called the 'golden asteroid' because it contains metals worth A LOT of money.

Gold isn't the only metal it has lots of - large quantities of platinum, iron and nickel also make it very valuable.

It's thought that if all the metal on the asteroid were valued, it would be worth a gigantic $15.8 quadrillion (that's 15.8 followed by 17 zeros!).

But even if the spacecraft does successfully reach the asteroid, there are currently no plans for mining or to remove the metal.

Nasa says the trip is simply a research mission to examine what the asteroid is made of.

The Psyche mission will be Nasa's first time investigating a world of metal, rather than rock and ice.

In a statement the space agency said: "The asteroid is considered unique, as it appears to largely be made of the exposed nickel-iron core of an early planet - one of the building blocks of our solar system."

The giant rock, which measures about 140 miles across, is found in an asteroid belt in our Solar System between Mars and Jupiter.

Nasa scientists believe 16 Psyche is a survivor of collisions between planets, which were common when the Solar System was forming.

That means it could tell us how Earth's core and the cores of the other planets were formed.

If everything goes to plan, Musk's rocket-building company SpaceX and Nasa will launch an un-crewed spacecraft from Cape Canaveral in Florida in 2022, with the spacecraft arriving at the asteroid in 2026.

Have you got what it takes to be an astronaut?

Did a huge collision between the Earth and a planet-sized rock create the Moon?