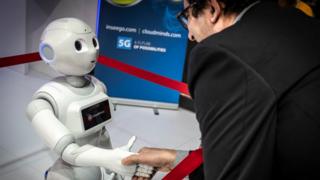 Robots are being used to help treat patients in a hospital in China.

Two hundred people there, who have been diagnosed with the coronavirus, are now being treated by them on a ward in the city of Wuhan.

Six types of robots have been brought in to help carry out basic tasks for the patients who are staying in a closed-off ward, such as delivering food and medicine, and keeping the ward clean.

They've been created by a Chinese company called CloudMinds.

Its CEO, Bill Huang, said: "This is China's first-ever entirely robot-led ward and an opportunity to test the capability of the technology and how we work together."

What is coronavirus and what's being done?

Coronavirus: Will schools close? Can my pet get it? Big questions answered

Some of the robots look like humans - for example CloudPepper pictured above - but others look more like boxes on wheels.

It is hoped that this will help stop the virus spreading and will protect hospital staff from catching it, while patients are still looked after. 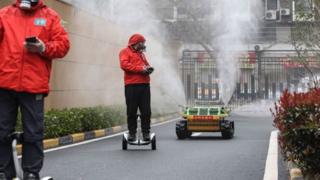 The robots have a map of the ward stored in a cloud-based server, and they're controlled by humans using a 5G connection.

Patients in the ward are also wearing bracelets that monitor their heart rate and their temperatures. These are recorded and shown on a screen outside the ward for hospital staff to view.

Most of the patients are on the ward because they are not in need of serious medical help, but if a patient is starting to feel worse then they will be transferred to a human-run ward. 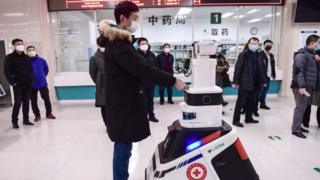 Getty Images
In Shenyang in China's north-eastern Liaoning province, a robot checks visitors' temperatures and disinfects the area to help staff in the hospital and prevent more infections

In the future, it might be that more robots will be used to help prevent the spread of coronavirus.

Already throughout the city of Wuhan, robots have been used to deliver food and disinfect outside areas.

Recently, scientists at Tsinghua University in Beijing have developed a robotic arm that can be controlled by doctors in a separate room.

The arm can swab patients' mouths, perform ultrasounds and even listen to their organs!

Mr Huang said the robots seem to have a positive effect on the patients: "I talked to staff in the hospitals. They say the patients are very bored being isolated, so they love to see the robots."

But professor of robotics, Chenguang Yang, said that while the robots could be very helpful, people working with the robots need to be careful as they are still being developed.