Coronavirus: How a TikTok dance challenge is spreading an important coronavirus message

A song put out by Vietnamese officials to encourage people to wash their hands has led to a TikTok dance challenge.

The song was made by singer Khac Hun and Vietnam's National Institute of Occupational Safety and Health and is based on a popular pop song called Ghen.

It explains how to wash your hands properly and tells people to be careful in crowded places.

A dancer in Vietnam named Quang Dang put together moves that match the lyrics and started a new TikTok craze.

In the video, Quang Dang and his friend both dressed in yellow, perform the dance which includes them rubbing their hands together.

Their performance has already had thousands of views on the social media site and loads of people are posting their own version! 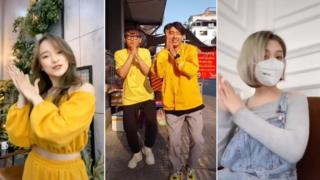 TikTok
Other users have been copying the dance

Now lots of people are performing their own versions of the ghen co vy (meaning coronavirus in Vietnamese) challenge and videos of people doing the dance have reached millions of views.

Even Unicef has promoted Quang Dang's dance video on Facebook, writing: "We love this handwashing dance from Vietnamese dancer, Quang Đăng. Washing your hands with soap and water is one of the first steps to protect yourself from #coronavirus." 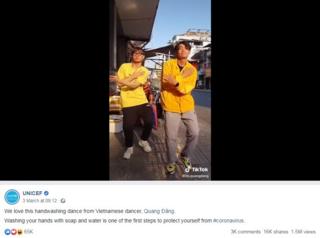