People around the world have been inventing different ways to greet each other to help stop the spread of coronavirus.

Shaking hands, hugging and kissing people on the cheek are some of the greetings that people are worried might spread the virus.

Public Health England and the NHS have not said that these greetings should be stopped.

However they have said that washing your hands is important, and that you should do it when you get to school, or arrive home; after you blow your nose, cough or sneeze; and before you eat or touch food.

You should wash your hands for 20 seconds, using soap and water or hand sanitiser.

To shake or not to shake? 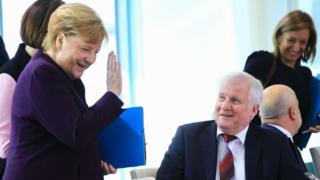 Getty Images
The German Chancellor went in for a handshake, then opted for a wave instead

German Chancellor Angela Merkel was politely declined a handshake from her Health Secretary at a big meeting.

As well as this, football players and match officials in Scotland have been told not to shake hands before or after games.

Around the world people have been inventing new ways to greet their friends without shaking hands.

For example in Wuhan in China they have invented the 'footshake' where people touch shoes instead.

Coronavirus: How children in China and Hong Kong are learning at home