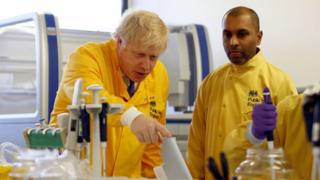 Prime Minister Boris Johnson has announced a coronavirus action plan to try to tackle and contain the virus in the UK.

The plan is in four stages and outlines what would happen if the outbreak was to get worse.

Speaking from Downing Street Mr Johnson said: "Our country remains extremely well prepared... We already have a fantastic NHS, fantastic testing systems and fantastic surveillance of the spread of disease.

How do vaccines work?

All you need to know about quarantine and self-isolation

"The plan does not set out what the government will do; it sets out the things we could do at the right time and on the basis of scientific advice," he added.

The prime minister also reminded people of what they can do to help stop the spread.

"Crucially, we must not forget what we can all do to fight this virus, which is to wash our hands with soap and hot water for the length of time it takes to sing Happy Birthday twice."

He did also add that at the moment he wanted to stress "that for the vast majority of the people of this country, we should be going about our business as usual".

What is in the action plan?

The plan has four sections; containing the virus, delaying its spread, researching where it came from and a cure, as well as mitigating or lessening the impact if the virus becomes more widespread.

Contain: detect early cases, follow up on people that they have been in contact with, and prevent the disease spreading.

Delay: slow the spread in this country and lessen the impact if it does become a big problem.

Research: better understand the virus and ways to treat it.

Mitigate: minimise the impact of people who become ill on the rest of society and public services, as well as providing the best care possible and supporting medical staff.

Lots is already being done to try and stop people from catching and spreading the virus.

For example, new regulations have been introduced in England which mean doctors and medical experts, as well as police, can make people stay in quarantine.

Similar powers are also in place in Scotland, Wales and Northern Ireland so the same can happen there.

What else could the government do?

At the moment, the government's response is still in that first stage - containing the outbreak.

If the outbreak were to become more severe and widespread though, it has plans which include closing schools and stopping large gatherings.

However, at the moment, the prime minister said that schools should stay open "if possible" and follow advice from Public Health England, which is the organisation in charge of keeping the nation healthy.

Similarly, the Mayor of London, Sadiq Khan, said there were currently no plans to postpone the London Marathon on 26 April.

There are other ways the government could try to slow down the spread of the virus, for example creating more adverts about how people can best protect themselves, such as proper hand washing.

Coronavirus: How to wash your hands

Coronavirus: How children in China and Hong Kong are learning at home