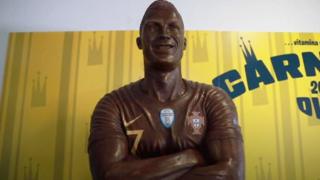 A Portuguese chocolatier has made a life-sized statue of the footballer Cristiano Ronaldo.

The Juventus forward has been made entirely out of chocolate - yummy.

Ronaldo's not the only unusual thing to have been made out of the sweet stuff, check out this list of chocolate-inspired items!

Check out this chocolate news

Why do we eat chocolate Easter eggs? 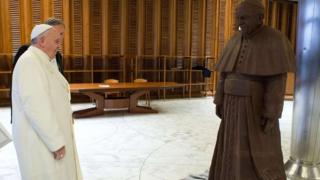 Ronaldo's not the only famous face to have been made out of chocolate.

Look at this life-sized replica of Pope Francis!

It was made by chocolate artist Mirco Della Vecchia and took 1.5 tonnes of chocolate to make.

The sound of chocolate 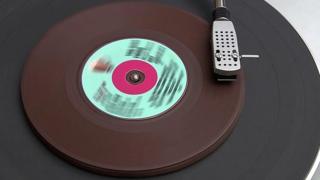 One artist got especially creative and made an old-fashioned vinyl record out of chocolate.

Not only is it edible - it can also play music!

It was made by Prudence Statie, an artist who makes pieces of art and sculptures which can be eaten. 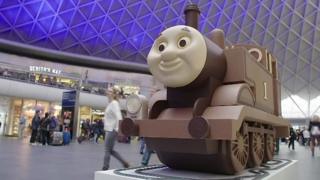 A six-foot tall Thomas the Tank Engine made entirely from chocolate went on display at King's Cross station in London in 2017.

The chocolate Thomas weighed a whopping 140 kilograms (kg) and took 250 hours to build by three chocolatiers.

A total of 100kg of chocolate was used to create the masterpiece, which is about the same as 50,000 chocolate buttons.

That includes 60kg of milk chocolate, 30kg of dark chocolate, 10kg of white chocolate and 25kg of cocoa butter - that's a choco-lot of cocoa! 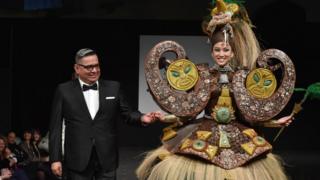 Chocolatiers and fashion designers collaborated to bring dresses made of chocolate to a Brussels catwalk.

Designer Giovanni Biasiolo used 8 kg of chocolate to make the dress to celebrate Belgium, the home of chocolate.

Fourteen different creations were on display at the annual "Salon du Chocolat" fair.

Weird clothes: Would you wear clothes made out of food?

Company says it has made a new type of chocolate

In pictures: Ten amazing sculptures made in unexpected ways

I can't believe these statues are all made of butter!

Check out these incredible, bendable sculptures

Straw sculptures: Amazing animal statues from around the world, all made out of straw