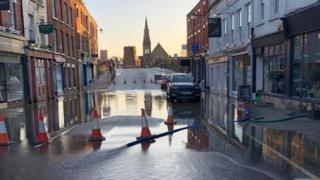 Parts of Shrewsbury are affected by flood water

Flooding has been causing big problems for lots of people across the UK.

In Shropshire, some rail lines have been closed and people have had to leave their homes as river levels continue to rise.

Two severe "danger to life" flood warnings are in place for the River Severn in Shrewsbury and Ironbridge, and people are being warned to avoid the area.

West Mercia Police said that residents who might be affected had been told and emergency services, including fire crews, have been monitoring the situation.

More on the floods

How UK wildlife is being affected by the floods

How do you keep pets safe in a flood? 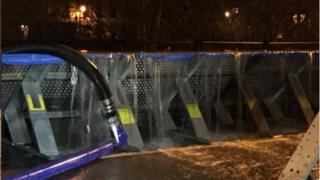 Lots of flood defences have been put in place to try and control the water, but there are concerns that water is going over the top of some of them.

On Tuesday evening in Bewdley, Worcestershire, the barriers weren't enough to contain the overflowing water.

The floods have reached record levels on the River Severn and the Environment Agency is working to pump the water away. 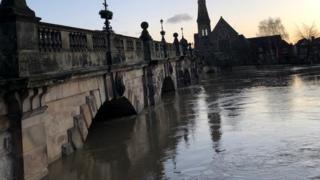 Rail lines have been shut in Shropshire because of the flooding

Hourly inspections are being carried out on the railway lines and Severn Viaduct which carries most of the lines in and out of Shrewsbury station.

A spokesperson from Network Rail said: "Flood waters have been very close to the level where we have to close the viaduct for safety reasons."

They added that would mean lines will "remain closed until levels have dropped below the closure mark".

The town's three main shopping centres have also been closed "for the safety of staff and customers", along with a number of colleges, libraries and schools there.

If you feel worried or anxious about flooding in your area, speak to an adult you can trust about it.

Storm Dennis: How has it affected the UK?