Sport Relief: Nick Grimshaw misses day two of The Heat Is On challenge 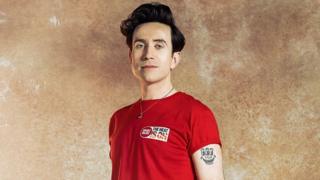 One of the celebrities taking part in this year's Sport Relief challenge has had to miss day two of the charity mission.

BBC Radio 1 DJ Nick Grimshaw said he is "absolutely gutted" he has had to stop for health reasons.

Nick is part of a team of famous faces who are trekking across the Namib Desert in Africa to raise awareness of mental health for Sport Relief.

Each of them is travelling by foot, bike and skis, yes skis (!), across 100 miles of desert.

The first day involved a 35-mile cycle ride, but Nick was forced to drop out before making it to the finish line, after suffering from heat exhaustion.

Nick said: "I got pulled by the medic just 2k from the finish line and treated for heat exhaustion. I'd been drinking, eating, resting regularly but it came on so quickly.

"I feel much better today and I'll be fine but they have advised that my body needs to recover so I can re-join the challenge."

'We've got a goal and we're gonna smash it' - Karim 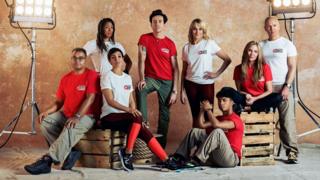 The team will be trekking across the desert on foot, bike and skis!

For the second day, the celebs have to walk for more than eight hours and battle temperatures reaching 35 degrees Celsius.

The team are hoping to have crossed the desert by Thursday on foot, bike and ski.

Speaking after yesterday's challenge Karim said: "It was brutal yesterday. So much harder than I could have ever imagined. I may be the youngest but that doesn't mean I'm fit. I was determined to make it over the finish line even if I crawled over on my hands and knees - which I practically did."

Sport Relief is back on Friday 13 March.

Sport Relief: The Heat is On: Challenge moves from Mongolia to Namibia

Sore loser? Take a look at these great sporting excuses