Chlorinated chicken: Why are people talking about American food? 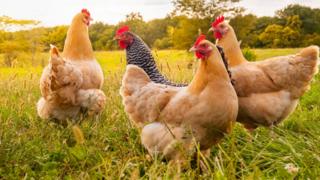 You might have heard some discussions about chicken recently.

Recently the UK's environment secretary was asked: "Will the UK start buying chicken from America?"

It's got a lot of people talking about whether that's a good idea or not, and how those chickens compare to the ones we buy right now.

Where does our food come from?

How much do you know about where food comes from?

Where does our chicken come from?

The UK produces about 60% of the chicken it eats.

And the other 40% mostly comes from countries in Europe.

Where does Brexit come into it? 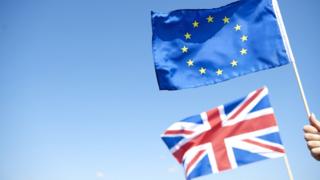 With Brexit on the horizon, the UK is now looking for ways to open up trade with countries outside the EU.

A trade deal with the US would be a big deal and it could mean that UK supermarkets start selling lots of food and drink from America.

The United States is a huge country and makes a lot of food. If it is sold here it could end up being cheaper than UK and EU-grown food, but some of the processes used there are very different

For example, the way America farms chicken has sparked a lot of conversation and arguments.

What the big deal with American chicken? 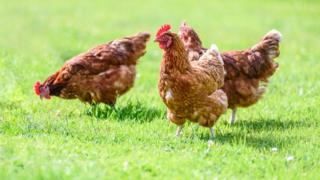 The way some American chicken is farmed and prepared for eating was banned in the European Union in 1997.

For example, there aren't the same rules in America around how many birds can be kept together. This means that sometimes they can be kept in cramped conditions which can be dirty.

To avoid infection a process called 'chlorine-washing' is used to clean their bodies. The chicken is washed in chlorine and other disinfectants to remove harmful bacteria.

Experts don't believe the chlorine wash in itself is harmful. But some worry that washing meat with chlorine at the end allows poorer hygiene elsewhere in the production process. 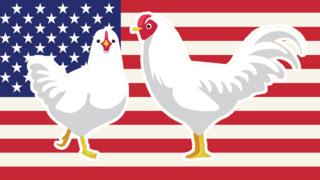 American officials say this kind of washing is safe and is a great way to deal with salmonella and other harmful bacteria and they point out that EU farmers use the method to clean vegetables.

The environment secretary, George Eustice, was recently asked whether chicken will be imported into the UK as part of a trade deal with the US.

He didn't rule it out and that has got people talking.

Eight things you'd never believe are made out of food

Vote: Are you getting the Easter school holidays off?

Prime Minister thanks NHS staff looking after him